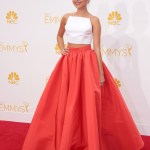 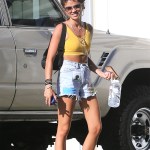 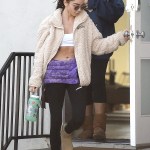 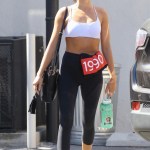 Sarah Hyland revealed the scars from her two kidney surgeries on her stomach in a cute pic that starred her Ellen DeGeneres underwear.

Sarah Hyland is proud to show her scars. The Modern Family actress, 28, shared a playful pic on Instagram that showed her flaunting a pair of Ellen DeGeneres boxers that she got from the show. In the pic, she’s lifting up her shirt to reveal the underwear, and you can see the scars from her kidney surgeries on her stomach. It’s not the focus of the pic, but Sarah makes sure that her followers know she’s not afraid to let them be visible. She captioned the pic, “Hey @theellenshow I know you’re besties with Jen but does she wear your underwear outside of her jeans like me? #showyourscars.”

She’s referring to Jennifer Aniston, who was recently on the show and revealed that she and Ellen have been best friends for the past 30 years. The Ellen Show account admitted that Sarah was more dedicated than Jen when it came to the underwear, “but she’s been known to drink wine out of an Ellen mug.” Touché! Sarah’s comment section was filled with supportive words from fans and famous friends who admire her for being open about her health problems. “Seeing your scar brings a smile to my face. It’s barely noticeable and to see you’re doing so well helps calm my nerves as I have surgery for kidney transplant on this coming Tuesday,” one fan wrote.

“I Love ❤️ it show your scars. I’m a Living Donor. So the scars in my body are my beauty marks 💚💚💚💚 God bless you always 🙏🏼,” another fan commented. “Be proud of your scars!!! You got thru a really difficult ordeal!!! I know how you feel… I have a scar on my stomach from having a kidney removed in 2014… I used to hate my scars but now they’re part of what made me SO strong!!”

Hey @theellenshow I know you’re besties with Jen but does she wear your underwear outside of her jeans like me? #showyourscars

Sarah has been straightforward with her fans about her struggles with kidney dysplasia, a condition caused by her kidneys not properly developing in the womb, giving her painful cysts. She has been in and out of the hospital over the past year for various issues, including undergoing a kidney transplant in December 2018. This was her second transplant after the first, from 2012, failed. Sarah, who also suffers from endometriosis, was hospitalized in March 2019 for complications from that disease, as well as a 104 degree fever and pink eye. She made a full recovery, thankfully.