Eva Mendes, 45, and her daughter Amada, 3, were spotted out together running errands in LA on Tuesday. The casually dressed mother-daughter duo were joined by a bodyguard as they exited a silver SUV. The actress was seen holding her daughter, who was dressed in pink, as she helped her into the family’s vehicle. Eva’s partner Ryan Gosling, 38, and their eldest daughter, Esmeralda, 4, were not present on the outing.

Nonetheless, the family of four was spotted out all together just days before Eva’s day out with Amada. Ryan, Eva and their two daughters were seen all-smiles while grabbing sushi at Kazu in Studio City, LA on May 14. The proud parents were pictured holding onto their daughters as they sweetly smiled at one another.

The recent family sightings came as Eva and Ryan have been struggling to teach their daughters Spanish. “Well the Spanish in my home… I’m Cuban and we’re trying to teach the kids Spanish, and it’s harder than I thought,” the very private fashion designer admitted during an appearance on The Talk, on May 20. “I speak Spanglish and that’s what they’re picking up. So it’s adorable but it’s technically not a language. It’s Spanglish,” she explained. 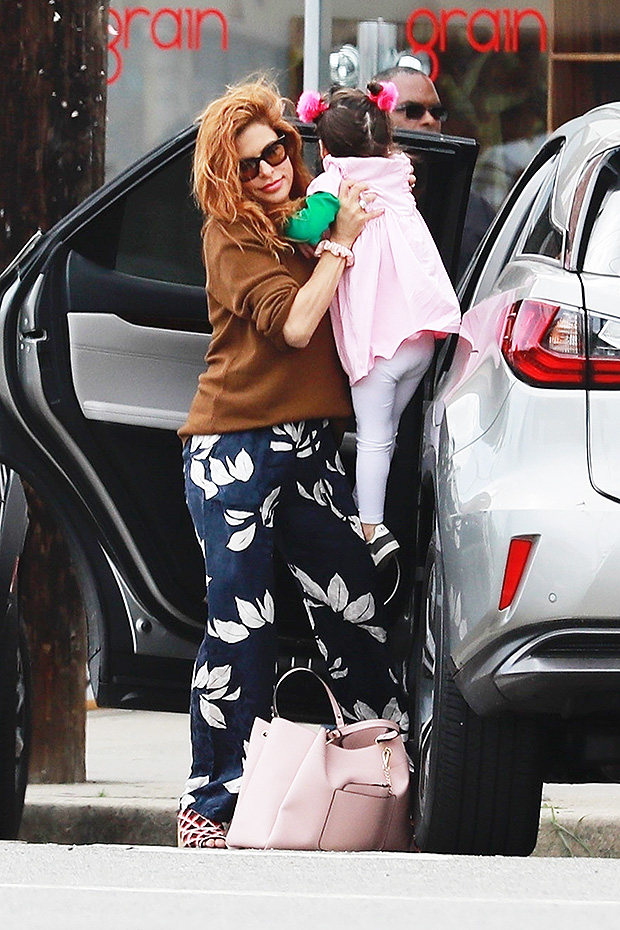 Eva Mendes holds her daughter Amada while out in Los Angeles, CA on Tuesday, May 21, 2019. (Photo credit: BACKGRID)

Eva continued, “So our little girl will be like, ‘Mommy, my boca (mouth) hurts because I think something got stuck in my diente (tooth).’ It’s so cute but that is not really gonna go great out there.”

The Hitch actress later discussed how having children wasn’t in the cards — that is, until she met Ryan. When The Talk co-host Sara Gilbert asked Eva “what changed your mind” about deciding to have kids, the actress simply said, “Ryan Gosling.”

“I was never one of those women who really wanted children, and then I fell in love with Ryan,” Eva explained. “I was like, ‘Oh I get it. I don’t want children, I want your children. I want your babies.” (*grabs tissue*)

Eva and Ryan began dating in 2011 after they met on the set of The Place Beyond the Pines, in which they both starred. The couple has remained extremely private when it comes to their relationship and home life with the daughters. Despite being together for nearly a decade, Eva and Ryan never officially married.