“We’re trying to teach the kids Spanish,” Eva Mendes, 45, said when visiting The Talk on May 20. The 2 Fast 2 Furious star said she and partner, Ryan Gosling, 38, are trying to raise their daughters, Esmeralda, 4, and Amada, 3, as bilingual, but it’s been a struggle. “It’s harder than I thought because I speak Spanglish and that’s what they’re picking up. It’s adorable but it’s technically not a language. So my little girl will be like, ‘Mami, my boca hurts because I think something got stuck in my diente.’”

It’s so cute but that’s not really going to work out there,” Eva said. The discussion shifted to how there was a time when Eva wasn’t sure she wanted kids. When asked what possibly changed her mind, she had two words: “Ryan Gosling.” However, despite being madly in love with the La La Land star, Eva admitted that it “took a minute” for her to change her mind about starting a family. “I was never one of those women who really wanted children, and then I fell in love with Ryan. I was like, ‘Oh I get it. I don’t want children, I want your children. I want your babies.”

Ryan and Eva didn’t have to say anything when they hit the streets of Los Angeles earlier in the month, as a picture is worth a thousand words. The lovely couple took their two daughters out for a sushi date at Kazu in Studio City. The happy family couldn’t have looked more in love, as Eva’s smile was from ear to ear. 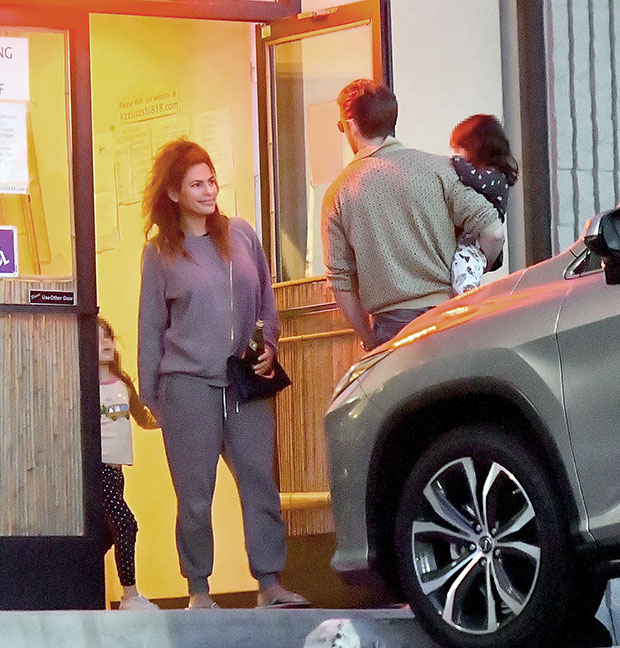 It was the furthest thing from my mind. Ryan Gosling happened. I mean, falling in love with him. Then it made sense for me to have…not kids, but his kids. It was very specific to him,” Eva said when speaking to Women’s Health. She also revealed that the couple has an “amazing support group” when it comes to raising their kids. “Ryan’s mom, my mom, Ryan’s and my sisters. It’s a village that helped us. My heart goes out to women who do this alone. I basically come from a single-parent household; although I love my dad, my mom mostly raised four of us on her own.” Well, judging by how much Ryan loves his children and Eva, she won’t ever have to worry about that fate befalling her.