Oh, imagine what could have been. Speed made Keanu Reeves, 54, and Sandra Bullock, 54, the biggest names in 1994, but as he revealed to Ellen DeGeneres on the May 17 episode of her talk show, it almost made them the hottest couple in all of Hollywood. After Ellen played a clip from the Dec. 20, 2018 episode of the Ellen DeGeneres, in which Sandra said she was crushing hard on Keanu on-set, the John Wick star made a startling confession: “She obviously didn’t know I had a crush on her, either.”

So, what did Keanu do about these feelings for his co-star? Nothing. “We were working,” Keanu, ever the professional, said. When Ellen pointed out how the chemistry between Jack Traven and Annie – Keanu and Sandra’s characters in Speed, respectively – seemed real because of the very real attraction between them, Keanu agreed that it was “nice to go to work” while filming the action flick. “She’s such a wonderful person, a wonderful actress.” Also, was Keanu blushing during the segment while taking this romantic stroll down memory lane?

Sadly, don’t expect Keanu to hit up Sandra for a date. She’s currently involved with Bryan Randall, 53, and the two were spotted holding hands outside of Jennifer Aniston’s 50th birthday party. As for Keanu, he’s quite known for keeping his personal life to himself. However, he might also not be available for a date, as he might be married to another one of his former co-stars, Winona Ryder, 47. 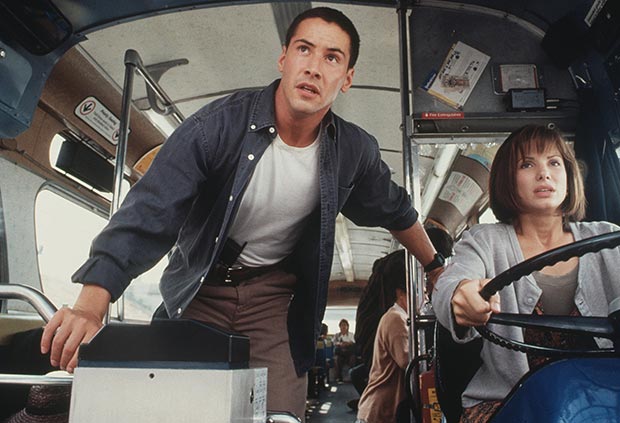 Winona — while doing press for Destination Wedding, the 2018 movie that saw her reunite on-screen with Keanu — said that they “actually got married in [1992’s] Dracula. No, I swear to God, I think we’re married in real life.” She said that director Francis Ford Coppola “used a real Romanian priest” during their character’s wedding. “We shot the master and he did the whole thing. So I think we’re married,”

“That’s what Winona says,” Keanu told Entertainment Weekly when promoting John Wick: Chapter 3. “Once in a while, I will get a text, ‘Hello, husband.’ I didn’t really believe her, and then Francis Ford Coppola, the director of Dracula, contacted Winona and said publicly that, yeah, that really happened, the priest did a full ceremony, and Winona and I got married.”

Related: Bryan Randall: 5 Things About Sandra Bullock’s Boyfriend Whom She Calls A ‘Saint’