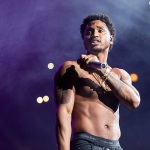 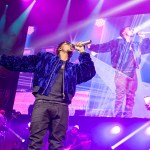 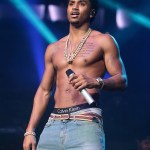 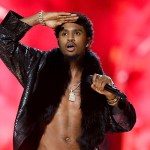 Are congratulations in order for Trey Songz? The rapper just shared a pic of a baby’s foot on Instagram!

UPDATE 5/17/12:15 AM EST: Trey Songz has confirmed he is a new dad. Shortly after midnight on May 17 he posted a photo of his infant son to his Instagram and wrote “My son Noah. We are blessed and overjoyed. Peace 🙏🏾” in the caption. You can see the pic below.

Does Trey Songz have something he wants to share with the class? The rapper, 34, sent fans into a frenzy by posting a pic on Instagram that showed his hand cradling a baby’s foot. He didn’t give his fans any hints about who the kiddo is, only captioning it with a blue heart. So… did Trey secretly just welcome a son into the world, or is this one of his friends’ children? Trey’s rep declined to comment. His fans immediately rushed to the comments section to try to decipher the black and white pic. The most popular theory thus far is that it’s a throwback pic of his young nephew, Aiden, who was born in 2015. Trey absolutely adores Aiden, to the point where he documented the first time he got to babysit on Instagram. “So blessed and very proud to call myself his uncle,” he wrote. So, it’s only fitting that he would share another sweet memory.

Not labeling it as such really isn’t doing anyone any favors, though. Fans are freaking TF out in the comments section, obviously. If this is Trey’s way of announcing that he’s now a father, the news is really coming out of left field. Trey isn’t dating anyone at the moment, at least publicly. While he’s been flirty with Lori Harvey, she’s definitely not the alleged mama — she’s one of the people who commented! Lori wrote, “Awww that little foot 😍 happy for you T!!! ❤️” Is that her confirming that this is Trey’s new little one, or is she just assuming, like everyone else? We need answers, people!!

Other famous faces, like Kehlani, Sammie, and DC Youngfly are kind of divided upon what’s going on. Kehlani wrote, “finally HAHAAAAA YES!!!,” Sammie commented, “legacy,” and Mel D. Cole said, “the nephew.” Seriously, Trey; which is it? The world needs to know!

My son Noah. We are blessed and overjoyed. Peace 🙏🏾

Trey’s not famous fans got in on the speculation game. One girl commented, “We know you’re a zaddy but don’t tell me you’re a daddy now👀👀👀.” One person asked the tough questions, writing, “all jokes aside, who this baby for?” And another resorted to using full names, so you know they’re serious: “Tremaine what is this?????????” HollywoodLife will let you know as soon as we find out.