When Lauren Bush Lauren, now 34, graduated from Princeton University, she didn’t look for a job — she created her job. The granddaughter of President George W. Bush and Barbara Bush had “public service” in her genes, and she set out to improve the lives of impoverished children throughout the world.

After already having served as a student ambassador with the UN World Food Program, she wanted to start a business that would raise money to feed hungry children in the US and in the developing world.

That’s how her company, FEED, was born and to date, it’s now provided over 107,000,000 meals to hungry children. At FEED Lauren designs and sells bags, purses, diaper bags, back packs and accessories, with profits funding meals served at school for children in need. Lauren explained in a keynote conversation at the BlogHer19 Food Summit, May 8th, that FEED was born after “years of frustration” — “years of she and her friends wanting to do something to make a dent” in the problem of childhood hunger in the world. She had an ‘ah ha’ moment during a trip to Australia, where she saw clothing and bags being made out of recyclables. “They were light years ahead” of America, she explained. She wanted her bag designs to reflect FEED’s mission. Designs were made out of burlap and branded with the company’s logo, reflecting the food sacks being delivered by the World Food Programme, that were stamped with words like, ‘Rice.’ 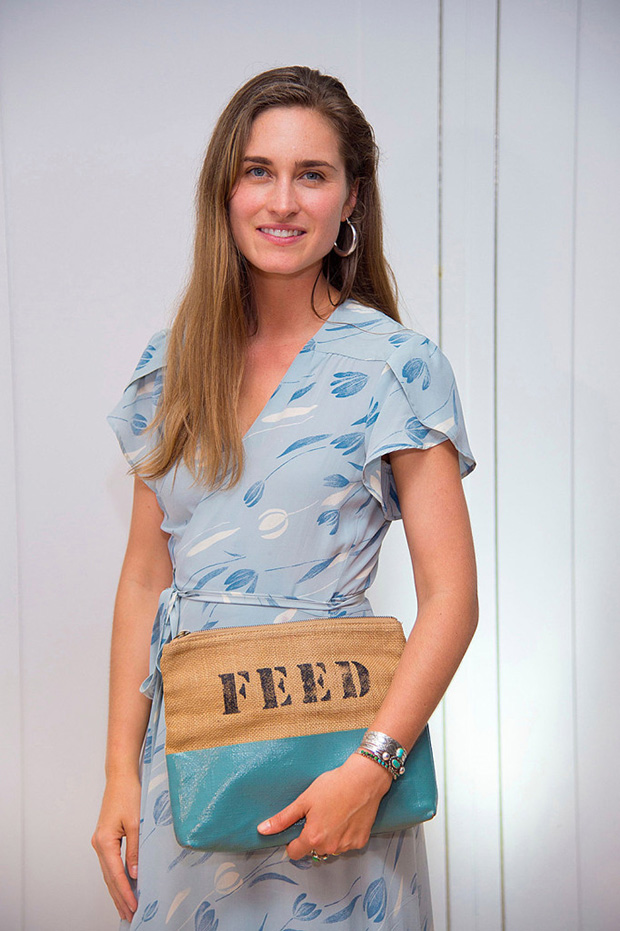 Today, FEED’s bags, which range in price from $28- $198, have a comfortable, functional look and each bag funds from 10 to 185 meals for children. Lauren realized that the best way to accomplish her goal of efficiently feeding millions of children was to work with established on the ground global organizations like the World Food Programme and No Kid Hungry in America. “FEED is very much there to raise money and awareness for programs that were working. We’re not trying to go out and replicate programs that operate on a massive global scale,” she explained in an EXCLUSIVE interview with Hollywoodlife.com.

The meals are provided at school, which has the positive effect of encouraging parents to send and keep their children in school. “The brilliance of the school feeding model is that when children are given that free school meal they’ll stay in school longer and in countries where girl’s education isn’t valued, parents will now send their daughters to school.” Lauren explains. “As a result they’ll get an education and have a chance at bettering their lives, bettering their family and breaking the poverty cycle they’re born into.”

In America, FEED often provides free school breakfasts to children who are qualified for free school lunch programs. “Teachers were noticing kids going to school hungry and then they couldn’t pay attention,” she explains.

As for what Lauren would say to people who don’t believe that government should be providing meals to children, for example in, the school lunch program? “I think feeding kids is something you just can’t argue with. Having the right amount of food and nutrition is essential and especially as a young person whose body and mind is developing so quickly — it’s all the more important,” the mom of two young sons, replies. “It’s kind of like the golden rule in my opinion — treat others as you would want to be treated.”

FEED has provided millions of meals to children in Rwanda, Madagascar, Mozambique and Sri Lanka, which Lauren visited just a week before the recent multiple terrorist attacks.

Many of her FEED purses and bags are made by artisan groups in Kenya and India, so the company is also providing jobs to local people. Now, after 12 years since FEED launched Lauren, who is married to Ralph Lauren Chief Innovation Officer, David Lauren, admits that she thinks about her business constantly. “It’s my first baby. I love what I do and 12 years in, there’s still so much to do and so much potential with FEED. It’s fun and it keeps you on your toes.”

To check out FEED’s purses, bags and accessories and to help feed hungry children go to feedprojects.com.