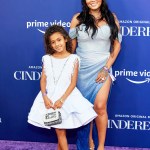 Chris Brown’s daughter Royalty sure has inherited his pipes, as well as his love of attention at a Mother’s Day concert. She was the absolute star in the adorable video taped by mom Nia Guzman.

Chris Brown must be smiling so hard right now after seeing his daughter Royalty‘s singing performance at a May 10 Mother’s Day concert at her school. We already know she inherited his dance skills, but she’s also got a powerful voice! The four-year-old sang her heart out at the top of her lungs as she and her classmates sang tributes to their moms ahead of the May 12 holiday. Royalty’s mom Nia Guzman, 35, taped the kids singing and shared it to her Instagram and it is beyond adorable. The little one wass so animated and singing so hard that her entire body moved.

“M-O-M. M-O-M. Mommy’s my best friend. We play games. We go to the park and the fun just never ends. M-O-M, It feels so good, it feels so safe you’re the best mom in the land,” Royalty belted out in a sweet tribute song with her classmates. She stood in the back row in a pretty red dress with her long hair pulled back in a high pony tail. At the end of the tune, Royalty threw her hands in the air above her head in celebration while the fellow students were less animated. This is Chris Brown’s child that we’re talking about so of course she’s going be giving a singing performance 150 percent.

“My princess had her Mother’s Day performance today! || @missroyaltybrown you did amazing baby!” Nia captioned the IG video. She also included another vid of Royalty presenting her with a Mother’s Day card with her hand print in pink with her sweet little handwritten “Love you Mommy” message next to it.

My princess had her Mother’s Day performance today! || @missroyaltybrown you did amazing baby!

Fans took notice of how Royalty absolutely stole the show at the Mother’s Day concert. One wrote, “I feel like she was low key fighting the urge to break out into a whole routine lol.” Another noted “SHE LOVES TO SINGING 🎤 AND DANCING 💃 LIKE HER DADDY.” One overjoyed fan pointed out “She was ready to start dancing 💃🏽! It was itching her not to move 💕😍” Yep, the apple didn’t fall far from the tree when it comes to inheriting her daddy Chris’ amazing singing and dancing talent.