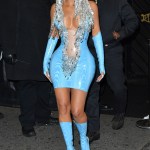 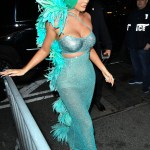 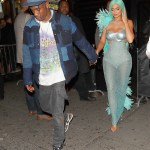 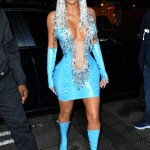 After the party is the after party — and that meant a whole slew of new looks for the stars who attended the 2019 Met Gala! Check out the KarJenners, Bella Hadid, Gwen Stefani and more in their after-party looks!

There were a bunch of different after parties that celebrities had the choice of hitting up following the 2019 Met Gala on May 6, and the fashion was on-point at ALL of them! Kim Kardashian hosted one of the bashes with Serena Williams, Travis Scott, La La Anthony and Trevor Noah, so it was obviously a star-studded affair. Kim changed out of her sexy Met Gala look into a skintight blue latex dress, which featured a plunging neckline that put major cleavage on display. Of course, her sisters, Kendall and Kylie Jenner, also showed up, with Kylie channeling a mermaid in a turquoise green outfit and Kendall SLAYING in a plunging, belted white mini dress with black print.

Hailey Baldwin also showed up to the Kim K. after-party, and she looked amazing in her sequined shorts and oversized men’s shirt, which hung off one of her shoulders. Her toned and tan legs were on display, which was departure from her actual Met Gala look, which was a completely backless gown that covered all of her body, aside from her back. Meanwhile, Gwen Stefani changed out of her bejeweled Met Gala corset into a sparkling silver mini dress, which she paired with fishnet stockings and thigh-high black boots.

Bella Hadid rocked a printed, skintight dress for the after-party, while keeping the short, side-swept hair she wore to the Met on display. As for Priyanka Chopra and Nick Jonas, they coupled up for an after-party, as well, and looked amazing in their coordinating blue outfits.

Click through the gallery above to check out more after-party photos from the 2019 Met Gala!