Tiffany Haddish’s inspiration for her Met Gala look was ‘pimperella’, she said on the red carpet at the annual event on May 6! Her ‘over the top’ pantsuit, by Michael Kors, consisted of 57,000 sequins!

Tiffany Haddish, 39, and her glossy pantsuit nailed the “Camp” (or “extra”) theme at the Met Gala in New York! The comedian channeled “pimperella” for her red carpet look — a black and white, zebra-print pantsuit by Michael Kors. “It’s pimperrella!”, she told E! News on the red carpet, adding that she misunderstood the event’s theme this year. “When I first heard, I thought, ‘Oh I get to wear a white t-shirt, some shorts and boots. I’m bringing smores. It’s going to be so much fun,” she recalled. “Then, they told me it’s ‘over the top [themed]’ and I was like, ‘Let’s go! Pimperealla!'” She also showed off bright blonde curly hair under her hat.

Later in the interview, Tiffany added that “they don’t feed you” at the Met Gala, which is one of fashion’s most prestigious nights. “There’s not enough food,” she said, before she opened her bag to show the snack she packed for inside the event, which prohibits cell phones. “I got chicken in bag! She ready!”, she added.

The actress revealed that her shiny flared-leg pantsuit and matching hat by Stephen Jones were made of 57,000 sequins to W Magazine. During the interview, which was published on the day of the event, Tiffany also went into detail about the Met’s lack of food. “Man, I was hungry as hell. Last year, I was so hungry,” she told the mag. “This year, I got me a bigger bag. Gonna put some fried chicken in it. Don’t tell nobody till tomorrow. [Laughs.] I’ve already called a few people that I know are going like, ‘So, I’m going to bring the chicken. You bring the hot sauce, okay?’” 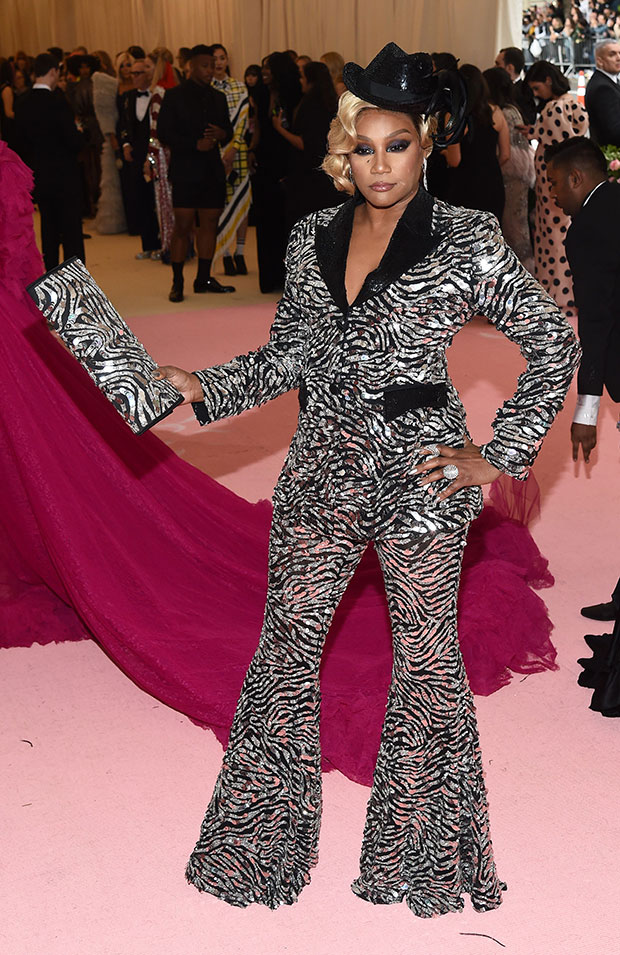 Tiffany Haddish wears Michael Kors at the Met Gala at the Metropolitan Museum of Art in New York City on Monday, May 6, 2019. (Photo credit: REX/Shutterstock)

The Met Gala had to have been a full circle moment for the comedian. In an emotional post on Instagram, April 26, Tiffany opened up about how she was homeless at a young age. She shared a throwback photo of herself performing at a stand-up comedy gig wearing a blue headband and matching tank top.

“I look at this picture and want to cry tears of joy for this Girl,” the Girls Trip actress wrote. “I remember that night. She was homeless, hungry, scared, and hurt. I promised her if she kept faith in God and Herself, We will get to a place where we will be Housed, Over Fed, Less Hurt and Fear Free.”

Tiffany continued: “I am so Grateful that she Believed. I am so Happy we have come this far and excited about where we will Go. Tiffany Sara Cornilia Haddish I Love and Approve of you and most of all God does too.” She concluded: “You are prefect [sic] enough for both of us right now and always,” adding the hashtags #SHEREADYFORSUCCESS, #ILoveYou, #SoHappyForYou, #DontWorryWhatTheyThink and #WorryWhatYouThin.

After she shared her story, stars including, The Rock and La La Anthony, replied with messages of love and support. And, speaking of fellow celebrities who’ve supported her, Tiffany previously opened up about how Kevin Hart played a pivotal role in her life during that time. Tiffany was performing a sketch comedy gig alongside Kevin, called Comedy Playground. During their time working together, Kevin discovered that Tiffany was homeless and living out of her car when he noticed that her car was filled with her personal belongings. That was when Kevin decided to confront her about what he had found out, Tiffany Vanity Fair during an interview published in January 2018.

“He had like this long discussion with me, you know?” Tiffany recalled. “Basically like, ‘You’re a beautiful woman. You could stay with any man. Why don’t you just stay with a man, like?’ And I was also like, ‘I’m not sleeping with nobody for a roof over my head. I’m just not that type of person.’ And Kevin was like, ‘Oh, that’s real commendable, look at your homeless ass.’“

Kevin ended up giving her $300 to get a motel room, and a valuable piece of advice. He suggested she write down her goals and begin working towards achieving them. Tiffany later added that the day after she wrote her list of goals, she was offered an apartment.