Serena Williams always plays by her own fashion rules! The tennis star brought a sporty flare to her Met Gala look on May 6! Serena stunned in a yellow Versace dress with sheer butterflies, and she wore neon yellow Nike’s!

Serena Williams, 37, opted for comfy and classy for her Met Gala look on Monday! The tennis pro rocked neon yellow Nike sneakers from her OFF-WHITE collaboration with Virgil Abloh — the Nike Queen Collection. Serena lit up the pink carpet from head-to-toe at the Metropolitan Museum of Art in New York with her Versace number. The bright yellow dress featured exaggerated sleeves (a trend at this year’s Met) and delicate, sheer pink and purple butterflies throughout.

Serena wore her wavy brown hair back, which kept her beautiful locks from colliding with her oversized sleeves. She wore colored rings, a silver diamond watch and dangling earrings. The athlete’s glam was minimal and didn’t take away from her bright ensemble.

The pro tennis player is one of the chairs of this year’s annual charity event, which is themed “Camp: Notes on Fashion”. — Another term for being over the top, or “extra.” She shares the coveted position with Harry Styles, Lady Gaga and Gucci’s Alessandro Michele. The group follows last year’s star-studded lineup of previous co-hosts: Rihanna, Anna Wintour, Amal Clooney and Donatella Versace. Anna, who has co-chaired the event every year since 1995, hand-picks her co-hosts each year. 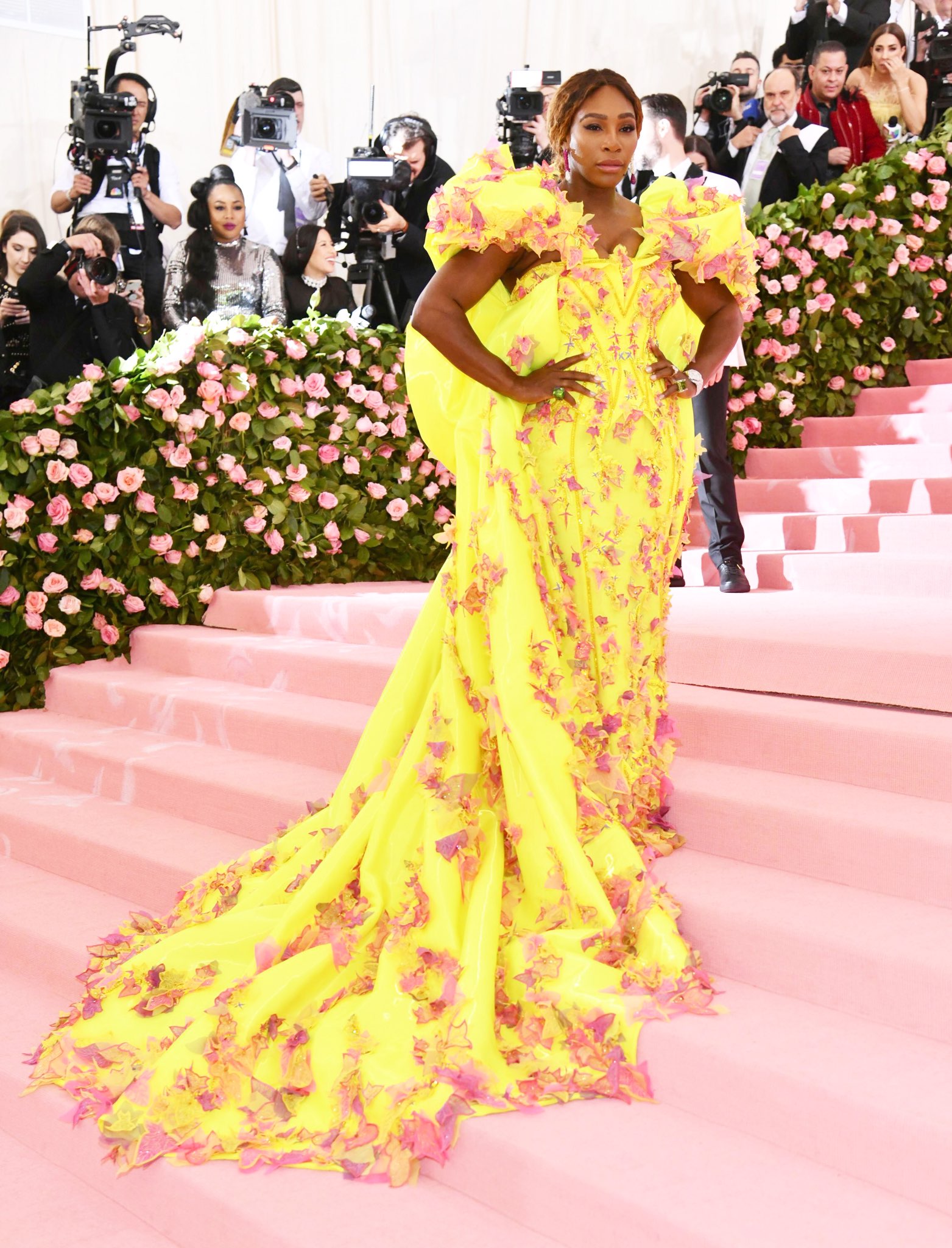 Serena Williams wears Versace to the Met Gala at the Metropolitan Museum of Art in New York City on Monday, May 6, 2019. (Photo credit: Matt Baron/REX/Shutterstock)

While there’s plenty of reasons Anna could’ve selected Serena as her co-chair, one good reason would be the fact that the athlete has already broken fashion barriers within her sport. Fans of the tennis player will know that she stirred up controversy in May 2018, when she wore a skin-tight black catsuit to the French Open. The French Tennis Federation’s President Bernard Giudicelli later criticized her for her attire, and promised to put forth stricter dress code rules that would ban her style of tennis clothes.

However, the Women’s Tennis Association Rules Committee and Board of Directors later approved of Serena’s look. In a shortened version of their rule changes for 2019, the organization stated that “leggings and mid-thigh-length compression shorts may be worn with or without a skirt, shorts, or dress.”

Serena and Alexis’ getaway to New York did not include their adorable 20-month-old daughter, Alexis Olympia. The pair, who wed in November 2017, welcomed their first child together on September 1 of that same year.