Kanye West made a rare appearance at the Met Gala with his wife Kim Kardashian for the first time since 2016!

Kim Kardashian slayed on the Met Gala red carpet, as usual, and she had some arm candy that she doesn’t typically take with her to the event! Kanye West joined Kim at the Met Gala this year for the first time since their appearance in 2016! Kanye didn’t join in on the theme, rocking a plain black zip-up, while his stunning wife took it to the next level, of course! Kim opted for a body-hugging nude gown that had her absolutely cinched at the waist, looking as gorgeous as ever. She showed off the clearly insane results of her plant-based diet she followed to prep for the first Monday in May!

While Kim looked happy to be there, Kanye frowned his way through the carpet, sticking close by Kim who handled the photographers and press with ease. However, the rapper send his wife the most adorable text messages this morning, which she shared on her social media! “This is your life/ Married with four kids/Get people out of jail/Cover of Vogue/Go to Church every week with your family/Dreams come true.” Wow, we need a Kanye in our life — supportive hubby through and through!

Kim gushed over another man in her life at the Met, designer Thierry Mugler! “This is the first time in 20 years that Mr. Mugler has designed, and he designed this gown for me and it’s such an honor,” Kim revealed to E! on the carpet, with Kanye standing over her shoulder, looking down. “It’s 8 months in the making. He envisioned me as this California girl stepping out of the ocean, wet and dripping — that’s the vibe tonight.” Kim teased her look on Twitter ahead of time by sharing a picture of Sophia Loren’s 1957 Boy on a Dolphin wet look! 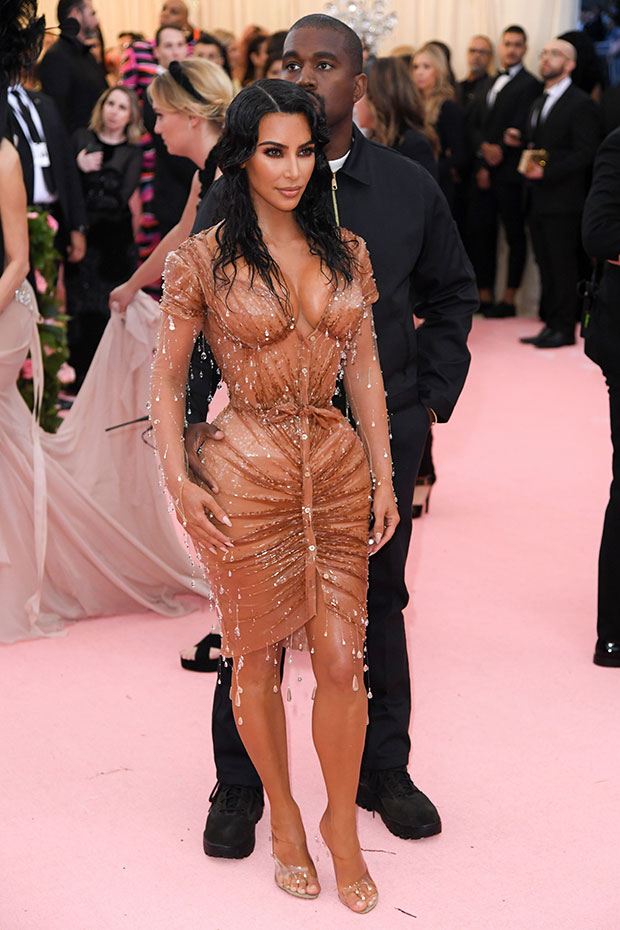 She revealed that she texted with her sisters Kylie and Kendall Jenner while they were all getting ready, discussing last minute outfit changes and additions. “Once we’re all a t the top of the carpet, I think we can all take a deep breath… actually I don’t know if I can in this corset!” KKW joked that she couldn’t wait to have donuts after the big event! We hope Kanye turns that frown upside down!