Kacey Musgraves didn’t disappoint at her first Met Gala! After teasing her #extra look all day, the country songstress stunned in a Moschino hot pink leather jacket dress with a super high slit and belt. The lewk featured an additional feathered piece that Kacey held on her arm, along with a pair of pink cat eye shades. She also rocked a long blonde wig to top off the outfit with a hot pink blowdryer purse, absolutely channeling the extravagance of Barbie — the epitome of the Camp theme!

That’s not all! The “Space Cowboy” singer arrived to the Metropolitan Museum of Art in a hot pink convertible, like come on Barbie, let’s go party! It’s not a huge surprise that Kacey opted for a Barbie themed look, after she teased her fans all day on social media with a variety of pink hints — a photo of hot pink Barbie sunglasses posted on Instagram, a picture of a hot pink Barbie vanity, a shot of tiny Barbie hairbrushes, an image of pointed-toe Barbie pumps in every shade of the rainbow, and even a photo of a Moschino Barbie doll! It brings us back to the good old days! 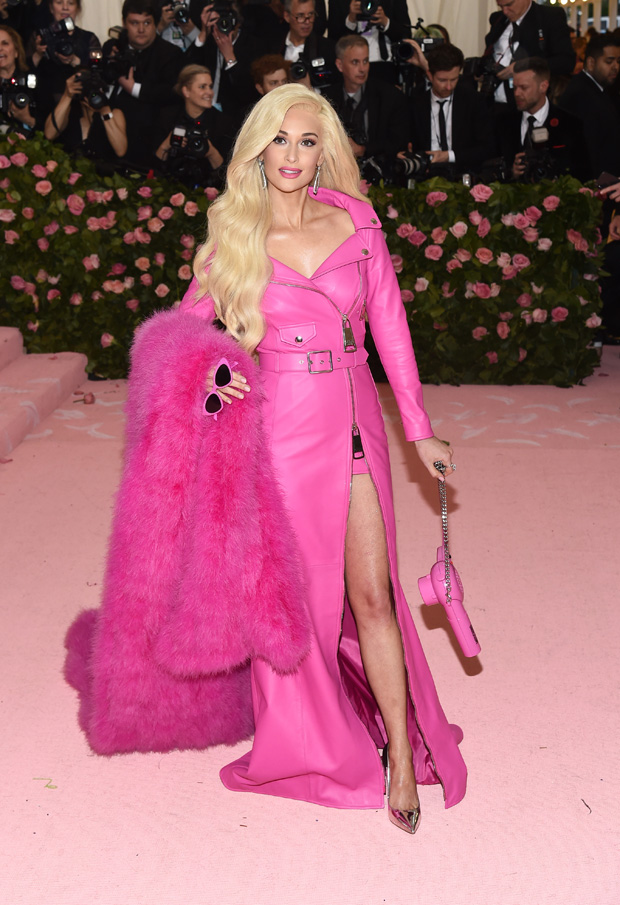 Kacey has had a huge year already, winning four Grammys, including Best Album, for Golden Hour. She’s become a fashion icon, so it’s no surprise she was invited to attend the Met Gala! Kacey’s overall style is typically on-theme with Camp, a nod to Susan Sontag’s 1964 essay, Notes on “Camp,” which begins by defining the term as “its love of the unnatural, of artifice and exaggeration. Kacey loves her hot pink, tulle, feathers, leather and #extra lewks, which we’re always fans of!