It’s Vegas glitz with Asgard glam. Celine Dion arrived to the 2019 Met Gala wrapped in sparkles, but it was her headpiece that literally turned heads on the carpet.

Celine Dion has arrived! Music most exquisite diva arrived waring a custom Oscar de la Renta gown to the 2019 Met Gala on Monday May 6 that will go down in history as one of her best looks ever. Channeling the iconic Ziegfeld Follies, the outfit weighs over 22 pounds, according to the press release, and was constructed from 18 panels and hand-beaded by 52 master embroiderers. Everything you see here — the matte silver sequins, the gold micro cut beads, everything here was stitched by hand to just the right length and took over 3,000 hours

As she walked the carpet, she spoke briefly to E! News, and shared she was very ‘attached’ to the construction of the look. “I’m going to go to bed in this tonight!” she proclaimed on camera. While many are comparing her look to the iconic Cher & Bob Macki styles of the day, we can’t help but think she’s channeling a bigger super power. Remember Cate Blanchett‘s character in Thor: Ragnarok.

You see it right? The tall branches on their head? The regal way they both carry themselves? Ok, maybe Celine isn’t going to destroy a whole planet like Hela, goddess of death, but there is no denying that she is slaying in this outfit. When they said the night was all about ‘camp’, Celine must’ve looked in the mirror and said, ‘I got this!’ 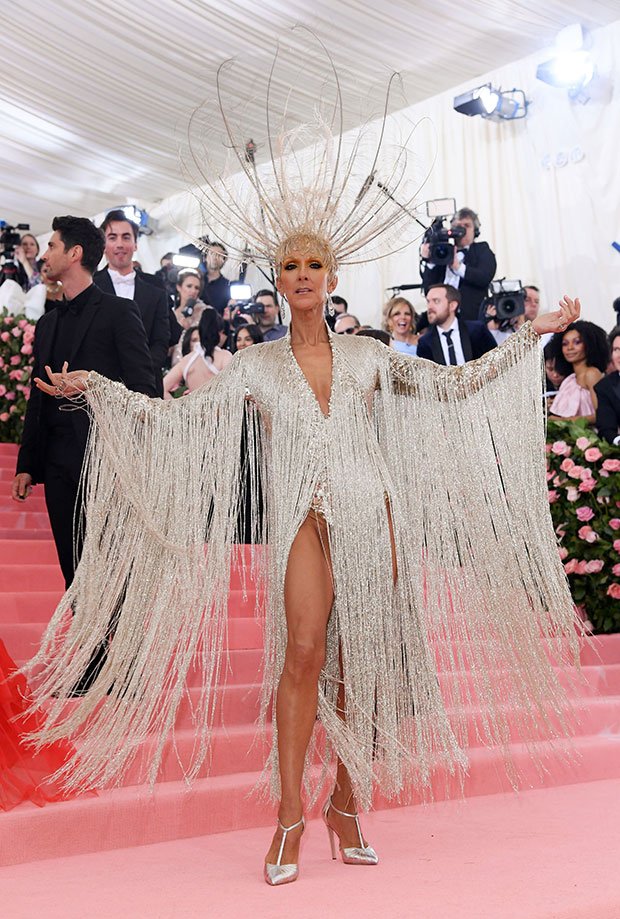 Just recently, Celine announced that after her Las Vegas residency comes to an end, but the superstar will be releasing new music and embarking on a world tour. Let’s hope those tour outfits are as memorable as this!