Cardi B and Nicki Minaj have a history of fighting at fashion events. Who can forget when Cardi left a NYFW event last year with a giant bump on her head, after getting into an altercation with Nicki. But this time their feud may have taken on a much more sartorial slant. At least according to Nicki’s fans, who took to Twitter to accuse Cardi B of copying her style. Last year Nicki wore an exquisite Oscar de la Renta gown featured a plunging neckline, dramatic red headpiece and a super long train. Flash forward to 2019 and Cardi chose an equally dramatic red gown with — you guessed it — a super long train. And just like Nicki she also wore a headpiece, only hers was a bejeweled swim cap.

Fans were quick to all out Cardi for the similarities with one fan tweeting a side by side pic and writing, “Cardi’s inspiration for today was Nicki”. Another fan replied, “Nicki is an obsession”.  But, not everyone on Twitter agreed. Plenty of fans jumped to Cardi’s defense with many calling the accusation a “reach”.  And one fan even tweeted, “except Cardi kinda did it better.” Still more fans pointed out that it was actually Rihanna who really started the super size dress trend with her unforgettable — and enormous — yellow Dior gown at the 2015 Met Gala.

We have a feeling Cardi will not take kindly to fans saying she stole Nicki’s look, especially since this is not the first time she’s been accused of it. Back in Dec. 2017 fans were convinced Cardi’s look in the music video for the remix of G-Eazy‘s “No Limit” was too close to Nicki’s style. And then Nicki herself chimed in on the conversation and wrote: “I’m glad ya’ll peeped.” But the odds of Nicki speaking out this time are low because as HollywoodLife previously reported she has moved on from her feud with Cardi and has put their beef “aside”.  Hopefully their truce will last though the night since they’re both attending the Met Gala this year and no one wants a fight at the museum! 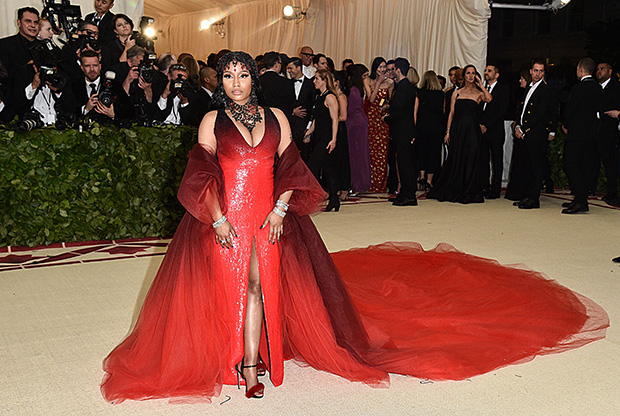 HollywoodLife previously reported about Cardi’s excitement over this year’s Met and the super-extra theme Camp: Notes on Fashion. Cardi kept all the details about her glam gown top secret but a source close to the “Money” rapper reveled that she would be going all out for fashion’s biggest night. “Cardi knows how to make an entrance, and the Met Gala of all things will be a big fashion moment for her.” And it sure was!