The one and only Billy Porter just arrived at the Met Gala in a one-of-a-kind look that is sure to be one of the highlight’s of the night!

Pose, and pose, and pose. Billy Porter just arrived to the Met Gala, and if you didn’t think he could one-up his Oscars look, well, think again. The Broadway star was carried in on a platform by six shirtless men, who happen to each be in Broadway shows, covered in gold. Billy, himself, was covered by his arms, that only showed the intricate beading of his gold and black look, designed by The Blonds. Billy sat erect on the platform like absolute Egyptian royalty. The Pose actor was placed on the ground by his six men and sent off to climb the Met stairs. Billy turned to photographers before embarking up the pink carpet, and opened up what turned out to be golden wings on his arms.

The “Sun God” ensemble is made up of a bejeweled catsuit outfitted with 10-foot wings, a 24-karat gold headpiece, as well as custom gold-leaf Giuseppe Zanotti shoes and fine jewels by Andreoli and Oscar Heyman! It was an absolute show-stopping moment. Ryan Murphy‘s Pose highlights the Ball culture in Harlem, which is often a major part of Susan Sontag’s ‘CAMP’ definition. “Ball culture is the campiest of Camp, it’s the idea of using fashion to emerge from the margins of society and to be seen,” Elaine Welteroth said on E! “This is a big moment for people from the queer community.” 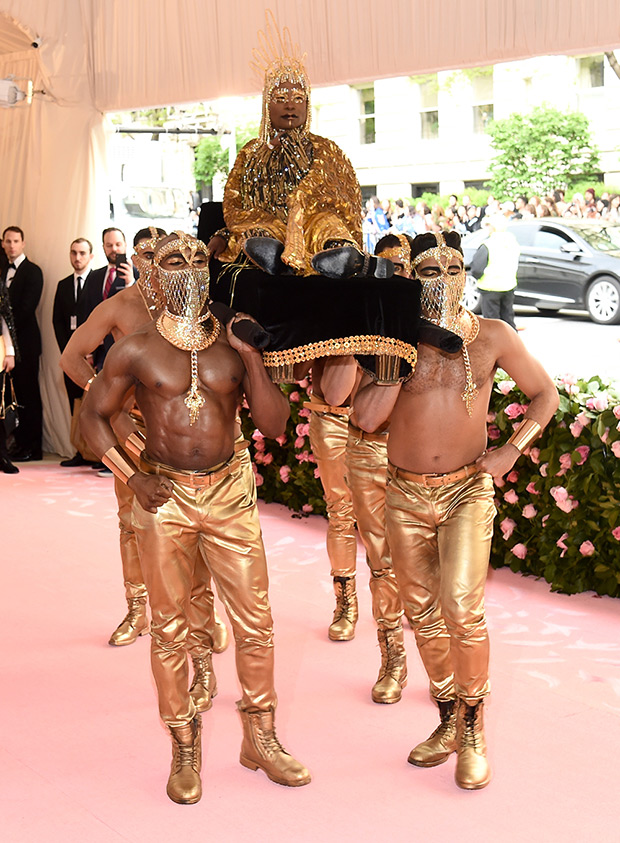 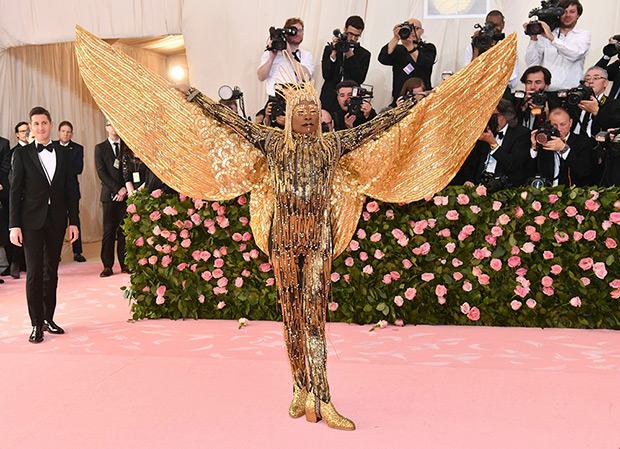 Andrew Bolton, the curator of the Institute, added to this commentary in an interview with the New York Times, saying, “Whether it’s pop camp, queer camp, high camp or political camp — Trump is a very camp figure — I think it’s very timely.” Billy Porter also spoke to Vogue ahead of the big night, telling the mag, “What I love about having it at the Met Gala, and contextualizing camp, is it brings honor to a word and genre that can be discounted very often, or thought of as cheesy. When it’s done properly, it’s one of the highest forms of fashion and art.” His look was inspired by Diana Ross in 1975’s Mahogany, and also Elizabeth Taylor in Cleopatra and Bob Mackie’s iconic costumes for Cher. The Blonds designers Phillipe Blond and David Blond were inspired by Pepper LaBeija, a fixture from the balls Elaine referred to earlier.