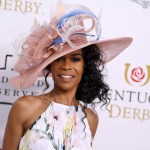 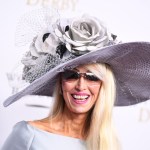 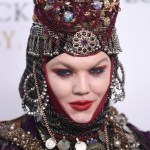 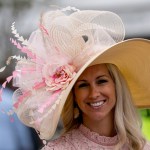 Now, that’s quite the topper. The 145th Kentucky Derby saw plenty of elaborate and unbelievable hats, as some celebs – like Destiny Child’s Michelle Williams – got in on the milliner madness.

Mint Juleps? Check. Horses? Check. Elaborate hats? Oh, double-check. The 2019 Kentucky Derby saw plenty of hair-raising hats on the top of many women attending the May 4 event. While a wild hat can make anyone a star at Churchill Downs, some bona fide celebrities attended the horse race in some eye-popping fashion choices. Destiny’s Child singer Michelle Williams matched her blush ruffle hat to her pastel and white halter dress. Meanwhile, Cassandra Amell took a darker approach by wearing an array of red roses, grey flowers and branches on her head. Then there was Dannielynn Birkhead who honored her mother Anna Nicole Smith by wearing the same a pink ribbon-covered hat that the late model wore at the event in 2004.

2018 saw Tina Knowles, 64, Mira Sorvino, 50, and Dannielynn Birkhead attend the event in some wide-brimmed fashions. Victoria Justice took a selfie in a stunning black hat, which seemed a bit understated considering the kind of hats that have been seen at the Derby. Brittany Cartwright’s hat in 2017 seemed like it was perpetually falling off her head, yet it stayed in place! It was almost as eye-catching as the pink fascinator that Kate Couric wore that year. So, will any of these 2019 stars join Kim Kardashian’s 2009 hat, Jessica Simpson’s 2004 giant pink creation and the massive red thing Cyndi Lauper wore in 2012 as some of the most memorable celebrity Kentucky Derby hats?

So, why do Kentucky Derby attendants – predominantly women – wear such exaggerated hats at the “Run for the Roses”? It’s a tradition dating all the way back to 1875. When Col. Meriwether Lewis Clark Jr., one of the Kentucky Derby’s founders (along with his bachelor uncles, John and Henry Churchill), returned to Kentucky after spending time in Europe, he envisioned a horseracing spectacle similar the ones he witnessed overseas. So, at the first run of the Kentucky Derby, he enlisted high-class women to recruit his target clientele. The loosening of the social norms around the 1960s allowed people to wear more extravagant hats (and the Royal Wedding in 2011 between Prince William and Kate Middleton popularized fascinators in the States.)

“When women got dressed up, especially when they were going to church and formal events, the woman’s crowning glory was the hat,” Darius Baptist, a stylist and executive director of YRB magazine, told ABC News in 2017. “In the South, women pride themselves on being Southern belles so wearing a hat to the Derby plays off of that. It’s also a combination of Southern culture and British culture.” Well, no matter who invented it — it’s one of the biggest and most beloved aspects of the Kentucky Derby.