Ben Affleck, 46, treated his kids to frozen yogurt this week after school. The actor was photographed outside a fro-yo spot with daughter Seraphina, 10, and his son Samuel, 7. His eldest daughter, Violet, 13, who he shares with Jennifer Garner, 46, was not present. Ben was all smiles on his day out with his kids.

The actor can be seen smiling in a photo from the desert event, while trying to grab a hold of his son’s hand. Meanwhile, Seraphina, who looked pretty in her school attire, held a book. She’s been photographed on a few occasions with a novel in her hand. Meanwhile, Samuel was dressed in a polo and khaki shorts.

Ben’s latest outing with his kids is just one of many family outings the actor has been spotted on in the past few weeks. He also spent the Easter holiday with not only Seraphina and Samuel, but Violet and Jennifer as well. The family dressed in their Sunday best while they attended a local church service together. 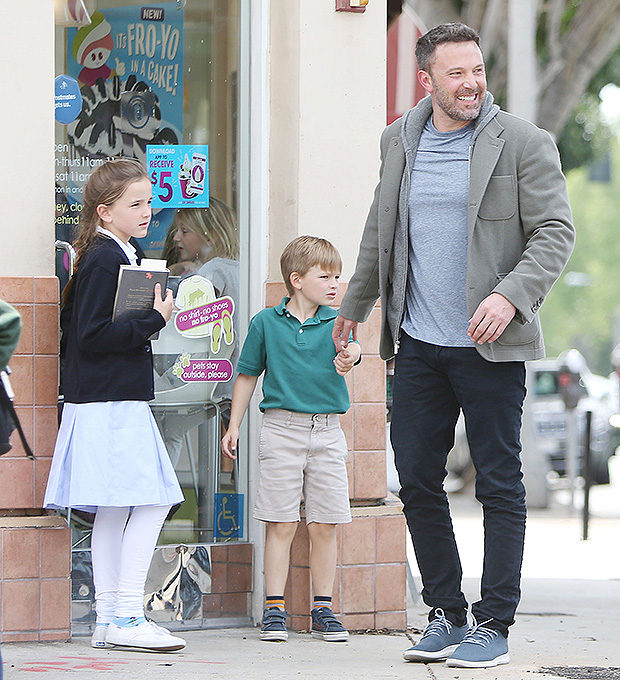 Ben and Jen have become pros at co-parenting, despite being divorced. The stars separated in 2015 after 10 years of marriage, but they’ve remained close friends, as Jen has helped Ben focus on his sobriety. Ben previously struggled with alcohol addiction for years, and it’s something he’s been very vocal about.

In March 2017, he announced that he successfully completed this third stint in rehab, and was “working toward a positive recovery.” As HollywoodLife previously reported, Jen has been nothing but supportive to Ben throughout his struggles. “Jen has made it clear to Ben that she is here for him and happy to do anything and everything she can to support him,” a source close to the exes previously shared. “Their family comes first to her and she knows Ben will always be a part of her life.” Ben and Jen officially filed for divorce in April of 2017, and finalized their divorce in October 2018.