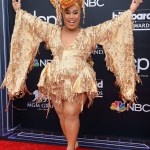 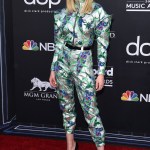 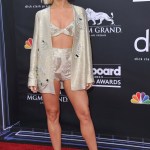 The Billboard Music Awards are the perfect time to have a little fun with fashion, but some stars take their wild looks to the next level. These are the craziest looks from the 2019 red carpet!

While some stars like to play it safe on the red carpet, a number of stars on the 2019 Billboard Music Awards red carpet did just the opposite. Halsey, City Yung Miami, Diplo, and more showed up to the ceremony with daring looks that were completely outside of the box.

Halsey’s electric blue dress definitely was one of the more eye-catching looks from the night. The singer opted for a strapless gown which featured a thigh-high slit, and lace detailing. However, between the multiple colors and materials used to make this dress, it had a LOT going on. This was definitely one of Halsey’s most bold looks to date!
City Girls member Yung Miami was hard to ignore when she hit the carpet at the BBMAs. The rapper is one half of the hip hop duo, but hit the carpet solo in a neon green dress that had cameras flashing. The wild number featured a plethora of layers of tulle, so much so, that it was a bit overwhelming. The rapper’s silhouette was lost in the the massive dress, which also featured a train. Click through the gallery above to see all of the night’s craziest looks!
The Billboard Music Awards are broadcasting live from Las Vegas and for the second year in a row, are being hosted by Kelly Clarkson. The show has no shortage of incredible celebrity appearances, and fans can expect live performances from Taylor Swift and Brendon Urie, Dan + Shay, Halsey, Jonas Brothers, Tori Kelly, Khalid, BTS, Halsey, Madonna, and more!