Madonna and Maluma are the duo we’ve always needed. They performed their new collaboration, ‘Medellin’ at the Billboard Music Awards on May 1 and had the crowd cha-cha dancing along with them!

Madonna, 60, performed her first new track in four years at the 2019 Billboard Music Awards in Las Vegas on May 1! The music legend joined forces with top Colombian artist, Maluma to perform their hit, “Medellin”. And, they did not disappoint! Madonna and Maluma put  on a sultry performance that included a little booty-tapping and a lot of cha-cha dancing!

Madonna started the performance solo. She was surrounded by holograms, as she sat on the stage in front of animated screens that showed a moving graphic of a grassy green field. The singer was dressed in a sultry black and white sultry, lace ensemble with fishnets and a bustier. And, she donned a patch on her left eye. Meanwhile, Maluma looked handsome in a black suit (minus the jacket) with red sparkling suspenders.

Other artists who will perform at tonight’s show include: Taylor Swift and Brendon Urie, Ariana Grande, Halsey, Ciara, Mariah Carey, Jonas Brothers, Khalid and many more. The 2019 BBMAs marks a slew of milestones for many artists who are set to take the stage. Taylor Swift, who opened the show with her new single “ME!”, with Brendon Urie, is performing the track for the first time live. And, it was Taylor’s first time performing at the BBMAs since 2013, when she sang “22.” Meanwhile, the Jonas Brothers performed their smash hit “Sucker”, which marked their first televised award show performance in 10 years. Ciara also performed her new song, “Thinkin’ Bout You”, for the first time live. 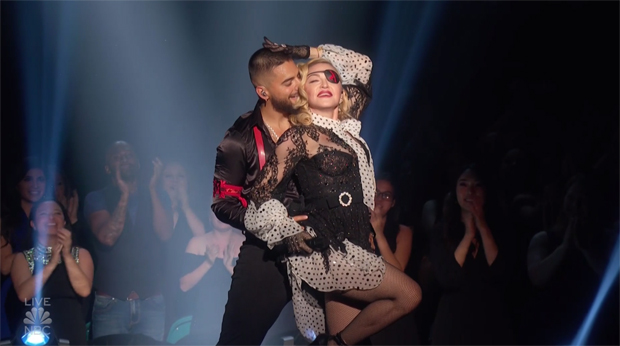 Madonna and Maluma perform at the Billboard Awards in Las Vegas on Wednesday, May 1, 2019. (Photo credit: NBC)

Madonna’s gearing up for a big year ahead. Her performance of “Medellin” was just a little taste of what’s to come on her forthcoming album, Madame X. — A whole new era of the music icon. Madonna’s 14th album, which is the follow-up to 2015’s Rebel Heart, is set for release on June 14.

Although her new album is a little over a month away, there’s plenty to know about the record before its release. Madame X contains 15 songs, all of which were inspired by the years she spent living in Lisbon, Portugal, according to Billboard. And, it’s evident that Madonna took a piece of the culture back with her since the outlet reported that the new album will include Madonna singing in Portuguese, as well as English, and Spanish.

As for what her Madame X persona is? — Madonna has described her in both an Instagram post and a video as a “secret agent / traveling around the world / changing identities / fighting for freedom / bringing light to dark places.”