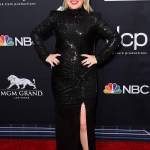 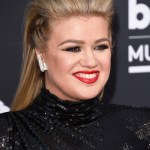 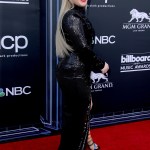 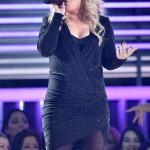 Kelly Clarkson is known for always having amazing fashion and her outfits while hosting this year’s Billboard Music Awards were no exception! We’re taking a look at all of them right here!

Kelly Clarkson, 37, had the most important role of the 2019 Billboard Music Awards on May 1, when she served as the host for the night, and she definitely did it while looking amazing! The talented singer showed off several different looks during the exciting award ceremony, which took place in Las Vegas, NV, and each one had style, grace and charisma. From colorful figure-flattering pieces to impressive fancy ones, this lady proved she can not only work a tune, but she can also work some serious fashion.

Kelly’s first outfit of the big music-filled night consisted of a long black sequined dress with a high neck line and slit. She wore a similar black sequined look at the opening of the ceremony. The only difference was a lower neckline and a shorter bottom. Kelly continued her black dress trend with her third dress, which had a blazer style top with gold-colored buttons. Her fourth black dress added a little Chanel detail to it in the form of a gold Chanel gold necklace and belt. Her fifth dress was black and long-sleeved with silver sequined designs on it, and her sixth was also black with a plunging neckline and silver dot sequins.

With so much awe-inspiring talent at such a big award show, as host, it can’t be easy to keep up, but Kelly certainly did by being her natural, funny self and looking her best while doing it! Her gorgeous fashion choices throughout the ceremony were truly memorable, and reminded us why Kelly’s one of the hottest fashion icons in the music industry today.

Kelly’s fashion proves she can wear just about anything and look fabulous. We give her major kudos for such an eclectic plethora of dresses at this year’s ceremony!