Cardi B always keeps it real! The rapper admitted that she had her breasts ‘redone’ after giving birth to her now 9-month-old daughter, Kulture! She also revealed why she’s suffering from mom guilt in a new interview.

Cardi B, 26, recently underwent breast cosmetic surgery! “I just got my boobs redone,” the “I Like It” rapper told Entertainment Tonight during an interview while on the set of her latest campaign photo shoot with Fashion Nova. “I feel good,” she said, explaining, “But, then sometimes I feel like not, you know? [When] your skin is stretched out.” The new mom, who gave birth to her first child — a daughter, Kulture Kiari Cephus — last July, hinted to fans (last) September that she was thinking about getting a breast “renovation” after Kulture “did her filthy.”

Speaking of the little one, she was on set during her mother’s Fashion Nova photo shoot, where Cardi also admitted that she often suffers from “mom guilt” because of her busy work schedule. “I do experience that mom guilt, you know? She’s here, but it makes me sad sometimes because it’s like, ‘Oh my gosh, all that traveling,'” Cardi explained. “I know her sleeping schedule is getting a little messed up … every single time that she gets on an airplane, it’s all good until the landing. She starts crying, and I just be feeling so sad because I know the pain, you know, when your ears pop.”

Cardi continued: “And sometimes, I wake up in the morning and she’s in my bed and I just want to cuddle and [I can’t]. It is getting harder because she knows me. She recognizes more now and that’s, like, you can just tell she wants me to be there,” the rapper said. “Sometimes, when she sees me leaving, she looks up and goes, ‘B–ch, where you going?'” 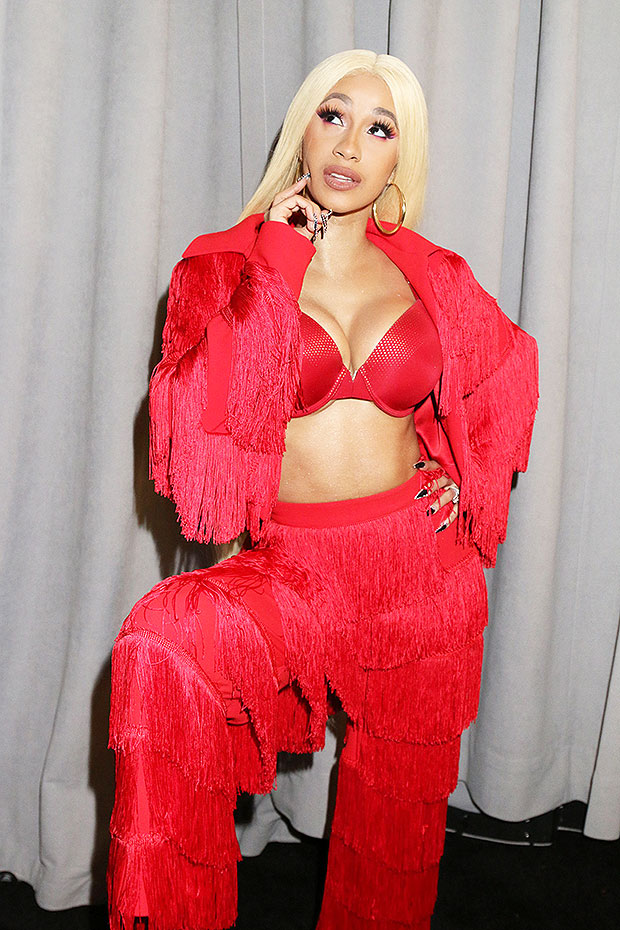 It’s unclear as to when Cardi underwent breast cosmetic surgery, however, it was in September 2018 when the rapper admitted that she was thinking of going under the knife. In a video she shared on Instagram, September 27 of last year, Cardi said that she had to tape up her boobs with duck tape because they were “low low” as a result from giving birth to Kulture.

“Giving birth and sh-t, my titties was already a little low low because I got my tits done when I was 19 and I never wore a bra and sh-t,” she explained in the video. Cardi ended the video with a message to her fans, warning them that if she went missing during the November and December months, “I’m going to get my tits done,” she said, adding, “Matter of fact, I’m not even gonna call it surgery. I’m gonna call it a ‘titty renovation’ because I gotta renovate these sh-ts.”

LET ME HEAR YOU SAY ! Fit by @bryanhearns I weight 118 pounds now I need some food and 🍆🍆

Cardi’s new Fashion Nova line was previewed by ET, who got a sneak peek at the 107-piece collection (her second with the brand), which officially drops May 8. Her new collection is inspired by ’80s and ’90s influences, mixed with themes of empowerment and rebellion. “This one is different than the first because we have more color. We have more cutouts, it’s more fun,” Cardi, who emphasized that the collection is affordable, but classy, said. “It’s more summertime, but it also has that Matrix look that I like.”