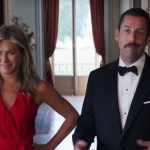 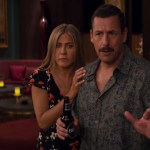 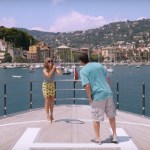 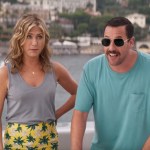 Jennifer Aniston and Adam Sandler have teamed up to play a married couple accused of murder and on the run through the most gorgeous parts of Europe in the new trailer for ‘Murder Mystery.’

Talk about a power comedy duo! Jennifer Aniston, 50, and Adam Sandler, 52, have teamed up for the new Netflix action-comedy Murder Mystery and the hilarious trailer just dropped on April 26. The pair play a bored couple married for 15 years who head out on a European vacation to spice things up. Jennifer’s character Audrey Spitz meets a dashing tycoon named Charles played by Luke Evans in their airplane’s lounge who ends up inviting the couple aboard his yacht off the coast of the French Riviera. They then become embroiled in a…..you guessed it, murder mystery!

Everyone else on the ship knows each other and appear to be among the rich and famous glitterati, leaving Americans Audrey and Adam’s bumbling NYPD detective husband Nick Spitz as the outsiders. When an elderly billionaire gets murdered aboard the yacht, everyone pins it on Nick and Audrey. That leaves them on the run from the law yet at the same time hunted down by the real killer/killers.

Before the chaos ensues, Jen and Adam’s characters attempt to spice things up in the bedroom. “Did you ever fool around on a boat? You just lay here and the boat does all the work,” Nick tells Audrey before a gunshot interrupts their foreplay. They later get their mojo back while on the run when they realize that confidence is the key to proving their innocence and finding the real killer. They change from dowdy outfits to a tux for Nick and a sexy red dress for Jen as they confront the other yacht passengers to let them know they mean business and will find the real culprit while clearing their names.

That meeting doesn’t go so well though, as Nick and Audrey end up on the run again, this time making a getaway in a red Ferrari. Only as they hop in the couple realizes the steering wheel is on the passenger’s side since it’s Europe, leaving Jen’s character to be their getaway driver. “Do you have any idea how gorgeous you look?” Nick tells her at one point before she crashes into the back of a cop car, causing it to careen out of their path. “I love you, that was sweet,” she responds as Taylor Swift‘s ‘Look What You Made Me Do” plays over the final clips of the trailer. This isn’t the first time the dynamic duo of Adam and Jen have paired up for a film. They starred together in the 2011 comedy Just Go With It and had been looking to work with each other again.