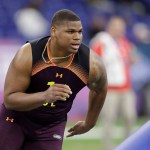 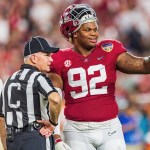 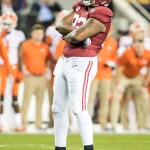 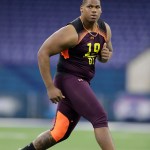 Get used to hearing the name Quinnen Williams. This defensive tackle and college football champion is about to be a huge NFL star. Ahead of the 2019 draft, get all the details about him.

At 21 years old, Quinnen Williams has accomplished so much, and he’s just getting started. The defensive tackle, who dominate during his last season with the Alabama Crimson Tide, is one of the top prospects in the 2019 NFL Draft. The 6’3”, 303-pound player has a 30.5” vertical jump, can run the 40-yard dash in 4.83 seconds, and has a 33 1/4” wingspan. He will be a great addition to any team that picks him on April 25, so before the NFL Draft goes down, here’s all the vital info you need to know.

1. He’s a college football champion. Quinnen Williams will be picked early within the first round of the 2019 NFL Draft and for a good reason. The Birmingham, Alabama native is already a champion, as he was part of the Alabama Crimson Tide squad that won the College Football Playoff national championship in 2017. After Quinnen redshirted his first year in 2016, he recorded 20 tackles and two sacks in his freshmen season. As a Sophomore, he surpassed expectations, making 71 tackles and 8 sacks. It’s possible that he could be the overall No. 1 draft pick, as the Arizona Cardinals could use all the defensive help they can get.

2. Sadly, he suffered tragedy early in his life. When Quinnen was just 12 years old, he lost his mother, Marquischa Henderson Williams, to breast cancer. “It hit Quinnen really hard. I mean, we called him momma’s boy,” his older brother, Quincy Jr., 23, said to NBC Sports. “I had to make sure he was still good and things like that, because he closed himself off a lot. I had to talk to him a few times [then], and we still talk about it now.”

“That’s especially true right now when he’s off by himself (during the pre-draft process), to say, ‘Mom’s proud of you,’ and things like that,” he adds. “It’s true. Our mom is proud.” That left his grandmother to raise him and his three siblings. It’s a debt he has never forgotten.

3. He has his priorities in order. As a top-five selection, Quinnen could be in line for a rookie contract worth at least $29 million overall, according to CNBC, and that could also include a $19 million signing bonus. With Quinnen about to come into a major payday, what is he going to do with all this cash? I think I’m going to buy my grandma a car,” he told TMZ in January. “She don’t really wear jewelry, so I’ll buy her jewelry.” What about splurging on himself? “I’m a real tight guy, and I really don’t spend money,” he added. “I’m going to still be wearing the same Nike [sweatsuits] and stuff like that.”

4. Quinnen will be finishing his degree at Alabama. By declaring himself eligible for the 2019 NFL Draft, Quinnen cut his college career short, and the decision didn’t please everyone in his family. ‘’My grandmother didn’t know what declaring early meant,” he told NBC Sports. “I told her I was leaving college, and she took that like I was dropping out. She couldn’t believe it because, to her, football is secondary. I had to tell her about the process of going back to school, and then she got behind it. I’m definitely going back.”

“That’s something I want to do for myself, but I know [his mother] would want me to do that,” Quinnen added. “She would also recognize the opportunity is a needle in a haystack for someone where I’m from. I have to take this chance and run with it.”

5. He went viral after seemingly throwing shade. In December 2018, Quinnen went viral after a reporter asked him if Oklahoma quarterback Kyler Murray resembled any player he’d faced before. “I feel like Kyler Murray is not, uh, what everybo–” he said, stopping himself, per AL.com When asked to finish that thought, Quinnen said, “Nah, I’m good.”

“We are trained, and we get coached by Coach [Nick] Saban not to speak on our opinions and not to speak about our personal feelings,” Williams said later on. “Speak about the game and speak about all facts. So, I felt like I was going into an opinion and I had to cut myself off.”

Note, Alabama did go on to defeat Oklahoma, 45-34, but they would lose the national title to the Clemson Tigers. Kyler Murray may have his revenge, as many are predicting him to be the overall no. 1 draft pick.