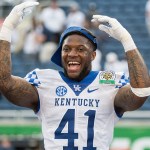 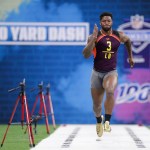 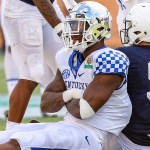 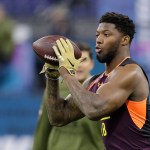 He’s been called the best linebacker in the 2019 NFL Draft, so who will pick Kentucky’s Josh Allen? Ahead of his big moment, get all the info about this defensive giant.

UPDATE 4/25/19: Josh Allen was the seventh pick in the 2019 NFL draft, going to the Jacksonville Jaguars.

At 6’5” and 262 pounds, Josh Allen, 21, shouldn’t move as fast as he can. He runs a 40-yard dash in 4.63 seconds and a 10-yard split in 1.61. His speed and size have made the Kentucky Wildcats defensive end/pass rusher a standout in the 2019 NFL Draft. With the next generation of football superstars being picked on April 25, Josh will likely be picked in the Top 5. The 2018 college football Defensive Player of the Year would bolster any team’s struggling defense, so the question is: which team will make Josh’s dreams come true by picking him? As fans eagerly await the draft, taking place at 8pm ET on ABC, get the scoop on this remarkable young player.

1. He’s a defensive powerhouse. Josh, who went to live with his relatives in Alabama when he was young, took up football after his uncle convinced him to try out for the high school team. After expressing a desire to graduate from Montclair High School, he returned to his native New Jersey. In his single year at Montclair High, he led the state in sacks and helped the team win the state title. He accepted an offer from the University of Kentucky after graduating. He would go on to break Kentucky’s record for career sacks (31.5), recording 17 of them – along with 88 tackles, 21.5 for a loss – as a senior. As an outside linebacker/pass rusher (referred to as an EDGE), Josh would be a star to any defensive line. So, who’s going to pick him?

2. As a New Jersey native, he wouldn’t mind sticking close at home. Could the 2019 NFL Draft be a sort of homecoming for Josh Allen? The New York Jets pick third in the first round and the Giants have the No. 6 pick. With many mock drafts predicting Nick Bosa and Kyler Murray as the interchangeable No. 1/No. 2 picks, there’s a possibility that the Montclair, New Jersey native could be playing in his backyard. “I’d be basically home,” he said on April 24, per the New York Post. “The best thing about it is I’d probably have an idea where I’m going to live.”

“I would just be real thankful,” Josh said. “Great, high picks and they both need an outside linebacker/pass rusher. So whoever gets me, I just want to make that team great. I want to be great. So let’s be great together.”

3. He’s a dad. Josh completed four years of college football, a rarity in a world where sophomores and juniors are forgoing their senior year so they can declare for the draft. Josh credits the birth of his son, Wesley, in 2018, as to why he returned to Kentucky for his senior year. “He just changed everything once he came,” Allen told the AJC. “That’s another way it humbled me. Everything I do affects him now. I feel like just being here with him also affects my decision and all that. Once he came, it changed everything. It made my thought process a little different.”

4. He wants to be the next Khalil Mack. Josh’s stats are similar to that of Chicago Bears star Khalil Mack, 28, and the similarities don’t stop there: they’re both were overlooked during the college recruitment period; both Mack and Josh picked up football while dropping basketball; both are represented by the same agent. Josh has respect for Mack but also hopes to be the next version of the defensive star.

“That’s a goal of mine,” he told ESPN. “He’s a great player, and I also want to be a great player. I want to learn from him. I also want to be my own player. At the end of the day, I want to make my own legacy. He’s already solidified himself as one of the best players ever, I believe. When my time comes in the NFL, when my moment happens, I hope it can be a breakout one.”

5. He is a twin – in more ways than one. Josh has a twin named Isaiah, and the two were trouble for their mom when they were kids. (“My mom was a single parent with six kids in the house, working two jobs,” Josh said, per Kentucky.com. “It was really hard at some points.”) When he joins the NFL, he’ll also have a “twin”: Josh Allen, 22, quarterback for the Buffalo Bills, and 7th overall pick in the 2018 NFL Draft. If former NFL offensive lineman (and former Alliance of American Football player) Josh Nathanial Allen, 27, finds his way back to the league, then there will be a trio of “Josh Allen” in play.