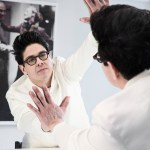 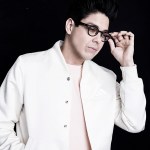 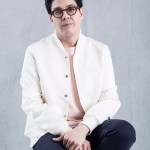 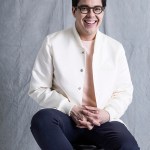 He’s more than just ‘Michael in the Bathroom.’ George Salazar takes on the role of Michael in ‘Be More Chill,’ where we see a supporting character turn into a star.

“I’ve performed ‘Michael In The Bathroom’ so many times in the last week, not just on Broadway, but for press. It’s so unexpected, it’s changed my life,” George Salazar tells me as we make our way into the photo studio at the HollywoodLife offices. He’s dressed in adidas (which is purposeful — not because they gifted it to him, but because he absolutely loves adidas), and his hair is perfectly swept upright into a Danny Zuko-type flow. His spectacles are circular and forest green with small embellishments, and he’s exactly what you’d expect he’d be after seeing him as Michael in Be More Chill — warm, personable and self-aware — the perfect ‘best friend.’ However, not the best friend we’re used to seeing played out in traditional entertainment. George Salazar is a Joe Iconis-created ‘best friend,’ which means that he is way more than a supporting character.

HollywoodLife: How has it been to see Be More Chill grow from the Two Rivers production in 2015 to Broadway?

George Salazar: I grew up mixed race. I’m a first generation American — my father’s from Ecuador and my mom is from the Philippines — and I grew up, almost being groomed to become a doctor. My parents, being immigrants, wanted so badly for their kids to have a completely different life, free of any kind of financial struggle. So, I grew up and thought that was it. I didn’t see myself in media, and so I didn’t really see a future in the arts. Fast forward to now, to see the reach that this show has and to see the impact that it’s had on young people. It’s really impossible to comprehend how this thing that we made over a summer in New Jersey has grown into production that has truly saved a lot of lives.

For my art to have that kind of an effect on young people especially…I feel unworthy of that thing. Plus, being a part of something that young kids who don’t see themselves in media today, are seeing themselves in this show is so special. You look at our cast and it is a perfect portrayal of the real world and what people look like, and what people breathe like, and sound like, walk like, and talk like.

HL: Does having that ‘responsibility’ to the youth freak you out at all?

GS: It makes the job a little more stressful because I know how much this character means to so many people. I have made a ton of lifestyle changes so that I can do my job to the level that I feel is expected of me, not just by young people, but also by myself. It’s been years since I’ve done a Broadway show, and so I wasn’t going to take this opportunity lightly and I was going to make sure that I was showing up and doing my thing. I don’t feel like the responsibility as a burden. It’s certainly a responsibility, but I welcome it with open arms because it’s really cool to be on the other side of the situation and know that people are looking to me for guidance and support and help.

HL: I like to think of Michael is almost the exact opposite of the SQUIP. Is Michael completely & totally comfortable with himself and who he is?

GS: He’s comfortable to a point, right? No one is completely comfortable. For me as the actor, I’ve learned so much about myself in the last three years of my life, and I’ve gotten so much more comfortable with who I am in 2019 then I was in 2015, so, I draw a little bit from that. Michael comes across as one of these kids, who at 15, 16 have themselves together in a way that I still don’t at 33, so I draw a little bit of that confidence from them, too. I see how comfortable they are in their skin and Michael, I feel like is the perfect representation of that type of young person. But, it’s also actually quite easy because in high school, I was terribly uncomfortable. And so eight times a week, I get to get a second chance in high school in like a really weird way. There’s a lot of me in Michael. For the first time in my life I’m playing a character that I feel really, personally connected to and in sync with.

HL: ‘Michael In The Bathroom’ is your big number, and it’s been the song that everyone has been talking about. What was your reaction to the song the first time you heard it?

GS: It was 2014. I did a workshop of it and Joe tells me, “We’re writing a new show and there’s a part in there that I think you’re perfect for.” We went into the room, he teaches me ‘Michael in the Bathroom,’ and at the time it was much lower. I have naturally a higher voice and it sat in an uncomfortable place, so we kicked it up a little bit, and by the time we found the key, my thought was, “This is the best thing ever.” Up until that point, I had not been trusted with a character with that much depth.

You get to know Michael at the top of Act One and he’s kind of silly, and funny, he’s a stoner, he’s cute and he’s lovable.Then in the top of Act Two, you see him in this really vulnerable place and he’s going through something real in a show that is a Sci-Fi Musical Comedy. He earns the love and affection of the audience in Act One so that by Act Two their hearts are breaking with you.

HL: That song is like a punch in the gut… because we’ve all been there.

GS: We all do it. I think that’s the key to this song — it’s so easily accessible for everyone. What’s really cool is there are people who come to see the show who don’t know anything about it, so the song starts, and everyone thinks that Michael is all jokes all the time. The lyrics are funny, and it kinda tricks you. What I have fallen in love with is when audience members laugh during the verse and first chorus, and then as the song progresses, the laughs just stop and it just gets dead silent. Everyone’s got a different bathroom experience. It’s something we all go through. We do it at Thanksgiving dinner, with people that we’re actually comfortable with, because they’re our family, but we still do it because sometimes you need that moment to be alone.

For Michael, there’s a line of people outside of the door and he’s at a party that he wasn’t invited to, but he snuck into. You just feel trapped and you feel helpless, your best friend just left you. These things on the surface feels so silly, basic and, and child’s play kind of stuff, but the emotions are real and they’re universal. Being trusted with the song, it’s truly changed my life.

HL: To you, what does the SQUIP symbolize?

GS: The need for acceptance. The need to be something that you’re not. It’s the personification of the pressures that we put on ourselves to be a version of ourselves that we think makes us enough, and in defeating that entity, we learn that we’re completely enough. I’ve always been saying to be as weird as you want to be. Don’t be like everybody else. Stand out from the crowd. You’ll get noticed that way and it makes you special. Own your weirdness. I feel like the big takeaway from our show is promoting your weirdness.

The SQUIP is that that voice in our head that, when you’re sitting in a bathroom and you’re criticizing yourself, that’s the thing never goes away, but we have to work our hardest to silence it a little bit. And if you can’t silence it, then just be like, “F you, SQUIP! I’m going to be me, I’m going to do me.”

HL: Why should people come to see ‘Be More Chill?’

GS: People should see Be More Chill because anyone who’s ever felt like an underdog will feel seen by this musical. Anyone who was ever uncool, should see this musical. It is, at its core, a very classical musical theater structure that’s got these additional, cool layers of sci-fi elements and a truly, we’ve learned, contagiously viral score by Joe Iconis, and performances by actors who come from all walks of life. We have people of all shapes, sizes, colors, backgrounds. It reflects what our world is and is becoming. I think people should come see our show because, also, I’ve never been part of a harder working cast. We are 10 principle actors who are also the ensemble. We never stop. So, if you want to come to see a show that’s gonna keep you on your feet and keep you excited and is going to have a nice message that isn’t preachy, but it’s going to subconsciously permeate your thinking, come see Be More Chill.