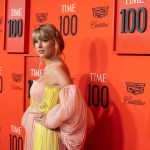 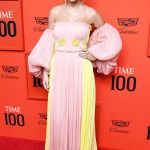 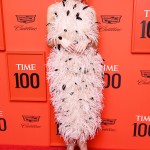 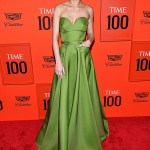 We can see why these celebrities made the ‘Time 100’ list — or were invited to the gala. From an explosion of feathers to a sheer ballroom gown, these outfits fit a celebration for the world’s ‘most influential people.’

The Time 100 Gala honored those who made Time Magzine’s “Most Influential People” of 2019 list on April 23, and the attendees didn’t let down the expectations of such a hefty title. Taylor Swift, 29, stayed true to her rainbow takeover on Instagram, arriving on the red carpet in a pastel pink and yellow J. Mendel dress with a flower crown on her head. We expected nothing less from a cover star for Time. The $7,000 dress is a big departure from the era of Reputation, making us even more curious of the tone she’ll set on stage when she performs later that night in New York’s Lincoln Center.

Martha Hunt, 29, graced the gala in the same shade as Taylor — blush pink — in a dress that packed on layers and layers of feathers! Although the model is not a Time honoree, she showed up as moral support for her friend — the blonde beauty was even seen arriving at the pop star’s home earlier that day. Opposite to Taylor, Emilia Clarke, 32, stepped out in hot red tulle and a see-through bodice to make a seductive entrance on the red carpet. The loud yet sexy ballgown was the perfect statement as the final season of Game of Thrones airs, where Daenerys Targaryen peaks in her true role as queen.

Glenn Close, 72, has had a lot of practice on the red carpet as a nominee for just about every award show during the 2018 season, and so she didn’t disappoint in an Armani outfit that was the definition of fun with blue and black embellishments. Her fellow Time honoree, Dwayne “The Rock” Johnson, 46, also opted for a more experimental look in a tan suede pantsuit, layered over a creme turtleneck. The retro look is not exactly common in The Rock’s slew of action blockbusters!

More stars turned up to show their support for the gala honorees. Naomi Campbell, 48, gave us a flashback to the disco age’s fun affair with fashion in a glittery, golden gown. Martha Stewart, 77, also stunned in a similar shade, which she wore in a chic two-piece blouse and pants set. You can see all the best dressed guests in HollywoodLife’s gallery above.