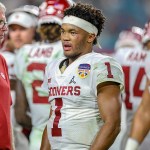 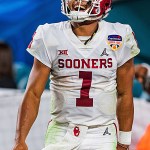 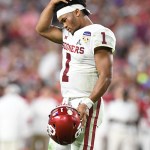 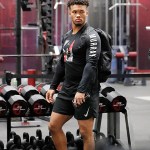 The 2019 NFL Draft is right around the corner, and the name on everyone’s lips is Kyler Murray. Ahead of the draft, get the details on the quarterback many analysts think will be the overall No. 1 pick.

The next generation of football superstars will be picked on April 25 at the 2019 NFL Draft. All eyes will turn to Nashville, Tennessee, and the one name topping many mock drafts is Kyler Murray. The 21-year-old Oklahoma Sooners quarterback is coming off the best year of his career, and many analysts think he will be the overall No. 1 draft pick. Will Kyler join the Arizona Cardinals, the team with the first choice in the draft? Could he tumble out of the top 10? Anything can happen on Draft day so before it happens, here on the details on this hot young prospect.

1. He’s a Texas native who found success in Oklahoma. Kyler Cole Murray was born in Bedford, Texas, and grew up playing football for the Allen High School team. While part of the squad, the team won three straight state championships and went on a 43-game winning streak (he missed one start and ended his high school record 42-0.) He joined Texas A&M in 2015 but announced in December of that year that he would transfer to University of Oklahoma.

2. Kyler won the Heisman Trophy. Per the NCAA transfer rules, Kyler had to miss out on the 2016 season. When he suited up in 2017, he was named backup to Baker Mayfield, 24, (who would go on to win the Heisman Trophy that year.) When the Cleveland Browns picked Baker as the overall no. 1 pick in the 2018 NFL Draft, Kyler stepped up. As the starter, he threw for more than 4,000 yards for 40 touchdowns. The performance won him the Heisman, giving Oklahoma back-to-back winners of College Football’s top honor. Kyler helped the Sooners win the Big 12 championship, but they failed to capitalize, as they fell to the Alabama Crimson Tide in the 2018 Orange Bowl.

3. He’s a two-sport athlete. Kyler has already been drafted by a team – but it was a baseball team. The Oakland Athletics picked Kyler as the ninth overall selection of the 2018 MLB Draft. He played baseball in college and had a .296 batting average with 10 home runs, 47 RBIs, and 10 stolen bases in the 2018 season.

A career in baseball was in the cards for Kyler, but after winning the Heisman Trophy, he decided to give this football thing a shot. He decided to forego his senior year and declared himself for the NFL Draft. If he returns to baseball, the A’s retain his rights so he might end up in Oakland someday.

4. Not everyone believes the hype…“I think that he should choose baseball,” former Washington quarterback Joe Theismann told NBC Sports. “I think that he would struggle in the NFL.” Joe thinks that Kyler’s height (5’10) will be a hindrance, as well as his style of play. “I think in professional football, it’ll be a real challenge and an uphill climb for him to be able to do the things that he wants to do and a team wants him to do.”

5. …and he had a devastating scouting report in March 2019. NFL Network analyst and former general manager Charley Casserly, 70, was not impressed with Kyler’s performance at the scouting combine, per Washington Post. Kyler didn’t take part in the on-field drills. He had his physical measurements taken and sat for interviews. The feedback from the interviews amount to “the worst report I’ve ever heard on a top-ranked quarterback from the interview part of it,” per Casserly. “These were the worst comments I ever got on a top-rated quarterback, and I’ve been doing this a long time.”

“Leadership — not good. Study habits — not good. The board work — below not good.” This review, along with the fact that the Cardinals drafted Josh Rosen, 22, in 2018, has some wondering if Kyler will go to Arizona. With Nick Bosa, 21, up for grabs, some think the Cards will grab the top pass rusher instead.