Jennifer Aniston and Adam Sandler reunite on-screen for their upcoming Netflix movie, ‘Murder Mystery’, and they look damn good! The actress shows off her amazing figure and toned legs, while Adam rocks a mustache in the first photos from their new movie!

Jennifer Aniston, 50, looks sun-kissed and stunning in the first photos from her upcoming Netflix film, Murder Mystery, which also stars Adam Sandler, 52. The actress puts her toned legs on display in a white mini dress with green, red and black floral prints, and beige wedges. Her signature straight hair is down in the photo, which shows her in the middle of what appears to be a serious scene from the film — out this June.

Meanwhile, her co-star, Adam, rocks a mustache in the photo (sen below). He’s pictured wearing tan khaki shorts and a white printed button-up shirt. Adam sports navy blue slip-on boat shoes, as the the two, along with a third co-star, are pictured standing on a cobblestone street. Murder Mystery is about a couple (Jen and Adam), who become suspects in the murder of an elderly billionaire. Adam plays a New York cop who takes his wife, Jen on a European trip he’s been promising to her. When they get invited to a family party on a lavish yacht, owned by the billionaire, things take a crazy turn. Jen and Adam reunite for the movie, eight years after they previously starred in 2011’s Just Go With It.

The movie veterans filmed most of Murder Mystery in Milan, despite originally shooting in Vancouver. Paparazzi photos of the pair holding hands on set, while dressed in the same outfits as the below photo, were released in August 2018. And, in the midst of shooting in Milan, Jen and Adam, along with his wife, Jackie spent time at Jen’s good friend, George Clooney‘s Lake Como home. The Friends star was photographed smiling, as she arrived to George’s villa, via water taxi with her co-star and his wife. 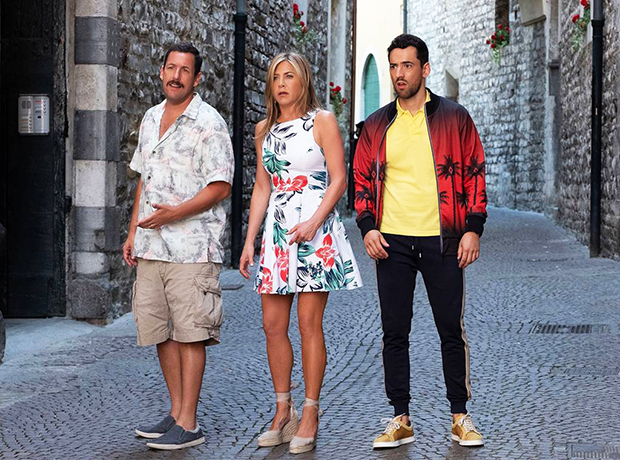 This marks Jen’s second recent film with Netflix. She previously starred in the 2018 musical drama, Dumplin‘. Jen played Rosie Dickson, a former pageant legend and the mother of a plus-size teenage daughter, Willowdean “Dumplin'” Dickson (Danielle Macdonald). The mother-daughter duo find themselves at odds when Willowdean signs up for her mother’s pageant as a protest that escalates when other contestants follow in her footsteps.