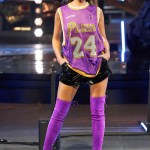 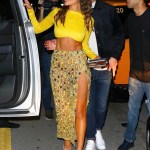 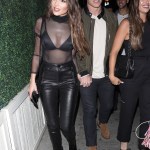 With the help of a famous line from ‘Pulp Fiction,’ Danny Amendola just sent a message to Zedd after the DJ danced with the NFL wide receiver’s ex, Olivia Culpo, at Coachella.

Zed’s dead, baby. Zed’s dead. Bruce Willis’ famous one-liner repeated as Danny Amendola, 33, watched Pulp Fiction on his laptop, which he filmed for his social media on April 18. It appeared to be more than a coincidence after an EDM DJ of (almost) the same name, Zedd, 29, was seen dancing with Danny’s ex, Olivia Culpo, 26, at Coachella on April 14. Danny remained silent throughout his clip, but the NFL wide receiver’s glowering stare — coupled with his intimidating six-pack that he decided to show — can safely be interpreted as shade.

Zedd and Olivia sparked dating rumors after they were filmed getting cozy on the dance floor at Ariana Grande’s set in Coachella, and it seems like Danny hasn’t overlooked the headlines. Zedd was filmed with his arms wrapped around Olivia, and the two swayed back and forth to AG’s vocals. “They were together for the whole set. His arms were around her as they swayed together, and she would lean her head back on his chest,” an eyewitness told TMZ. Earlier that night, the model and her crew even hung out backstage at Zedd’s set.

Olivia and Danny were linked together between 2016 and early 2019, but it’s been an up and down ride. They split in March 2018, were seen at a friend’s wedding together by June of that year, and Olivia confirmed they were officially back on in Sept. 2018. Their relationship took a turn by the next month, however, as Danny was seen wading in the water in Miami with CBS reporter Bianca Peters. Days later, Olivia revealed that she kept her ex-boyfriend’s birthday present — a $12,000 Rolex watch. Their second breakup appeared to be over when Olivia and Danny spent New Year’s Eve 2018 together, and grabbed sushi with pals on Jan. 12. And now we’re here, with Olivia and Zedd being music festival buddies and Danny fuming behind his laptop.

“Danny can’t quit Olivia, he thinks she is too hot and feels that their chemistry is undeniable,” a source close to Danny EXCLUSIVELY told HollywoodLife in January, before Olivia and Zedd were seen together. “Despite some mistakes he has made in their relationship, Danny feels lucky that Olivia has forgiven him and he believes they are destined to be together.”