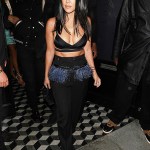 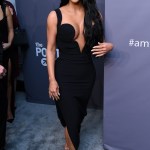 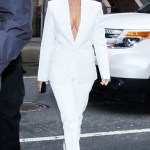 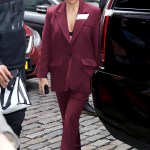 Kendall Jenner looked gorgeous while flaunting her figure in a leopard print mini dress during a lunch outing with her hunky model friend Fai Khadra in Los Angeles on Apr. 17.

Kendall Jenner, 23, looked amazing when going out for lunch with KarJenner friend Fai Khadra, 27, on Melrose Ave. in Los Angeles, CA on Apr. 17. The brunette beauty wore a tight leopard print mini dress with a plunging neckline, black heels, and sunglasses for the outing, while Fai looked casual but handsome in a white Sonic Youth t-shirt. The duo sat at an outside table at a restaurant while enjoying food and were seen walking alongside each other outside the restaurant as well.

This isn’t the first time Fai has been seen with Kendall. He has noticeably been hanging out with the model and her sisters on occasion and although he’s been rumored to have been dating Kendall in the past, the Keeping Up with the Kardashians star has been romantically involved with Philadelphia 76ers basketball player Ben Simmons, 22, on and off over the past year.

If things don’t work out between Kendall and Ben in the end, though, it looks like the reality star already has another impressive man crushing on her and it’s none other than the late President John F. Kennedy‘s grandson, Jack Schlossberg, 26. The report of Jack’s feelings made headlines on Apr. 15 when it was mentioned in the article for Kendall’s sister, Kim Kardashian‘s latest cover issue of Vogue magazine. “At one point, Kim is holding court in a sitting area just outside her bedroom. Someone from the crew mentions that the very handsome young John Bouvier Kennedy Schlossberg, son of Caroline [Kennedy Schlossberg], reportedly has a crush on her half-sister Kendall, and Kim’s eyes twinkle at the prospect of colluding over some dynastic matchmaking,” writer Jonathan Van Meter wrote in the article.

Whether Kendall has a future as a Kennedy or not remains to be seen, but it’s great to see her living it up in her current day-to-day life and looking incredible while doing so!