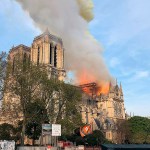 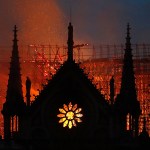 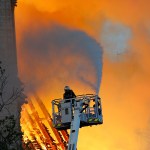 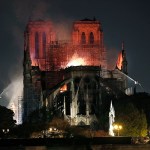 Notre Dame Cathedral’s structure has been saved after a fire engulfed the historic building, raining ash down upon people on the streets below.

UPDATE: 11:09am 4/19: Notre Dame rector Patrick Chauvet said a “computer glitch” may be the reason for the catastrophic fire that damaged the cathedral earlier in the week. Chauvet did not elaborate on the nature of the “glitch,” telling AP that “we may find out what happened in two or three months.” Paris police are investigating whether the fire is linked to a computer glitch, as Chauvet says, or to the temporary elevators in the church used during its renovation.

UPDATE 6:08 pm 4/15: Notre Dame cathedral, including its two towers and northern belfry, has been saved by firefighters as the fire has been lowered in intensity, according to Paris fire brigade chief Jean-Claude Gallet and Deputy Interior Minister Laurent Nunez.

UPDATE 2:50 pm 4/15: Paris Deputy Mayor Emmanuel Gregoire has now confirmed that the fire started within the spire and that Notre Dame Cathedral has suffered “colossal damages.” First responders are now focusing on saving priceless artwork and artifacts stored within the cathedral before the building burns down. They are trying to remove some of the cathedral’s stained glass windows, as well.

ORIGINAL: A massive fire overtook the 850-year-old Notre Dame Cathedral in France on April 15, bringing parts of the legendary building down in a rain of ash and flames. Firefighters worked tirelessly to battle the inferno, but the fire is not contained at the time of publication; AFP reports that the fire is “partially connected” to a $6.8 million renovation project going on at the cathedral, and is being treated as an accident. Scaffolding on the facade of the building was engulfed in flames as it and the roof of the church started to collapse. One of its famed spires heartbreakingly burned down at 8:07pm local time, framed by a plume of brown smoke that shot up high into the air. There are no confirmed injuries or deaths in the accident.

People gathered in the streets to watch the horrifying scene unfold. They were heard in videos on social media gasping and screaming as the first spire on the 12th century building fell. Last year, France’s Catholic Church pleaded for funds to save the French landmark, which was starting to crumble. They feared that the cracks in the walls would become too much for the building to handle. Construction workers had removed many of the bronze statues inside the church before the fire for renovation, which included work on the now-destroyed spire. The cathedral, located in the heart of Paris, on the Île de la Cité in the middle of the Seine River, welcomes roughly 13 million visitors every year. They were expecting upward of 1000 people next weekend for Easter Sunday.

Paris mayor Anne Hidalgo tweeted,  “A terrible fire is underway at Notre-Dame Cathedral in Paris. The @ PompiersParis are trying to control the flames. We are mobilized on the spot in close connection with the @ dioceseParis. I invite everyone to respect the security perimeter… The fire department is working on controlling the flames. We are mobilized on site in close connection with the Diocese of Paris. Please respect the security perimeter.” France’s President Emmanuel Macron will be visiting the site later, according to a government spokesperson. He tweeted, “Our Lady of Paris in flames. Emotion of a whole nation. Thought for all Catholics and for all French. Like all our countrymen, I’m sad tonight to see this part of us burn.”

Firefighters in Paris say there is a fire at Notre-Dame Cathedral. https://t.co/HHUXgZE4x1