As if the desert wasn’t hot enough! Cardi B, 26, and Offset, 27, turned day three of Coachella into their very own date night when the Migos rapper brought her on stage during his set at REVOLVEfestival on Sunday! The couple performed their joint track, “Clout”, off his debut solo album, Father of 4, and put on major PDA for the packed crowd. See Cardi and Offset’s onstage kiss in the below photo.

The duo’s Coachella kiss came on the same day he surprised her with a slew of expensive gifts from Chanel. The “Money” rapper shared a video of her new coral Chanel bag, blue slides and other items of clothing by the brand. “He’s always spoiling me,” Cardi said in a video on her Instagram Story. “I love you daddy,” she added before the pair could be heard kissing.

Cardi has been full of surprises during Coachella’s first weekend. The rapper showed up unannounced during DJ Snake‘s set on Friday, April 12, to perform their hit collab, “Taki Taki” live for thousands of screaming fans. Ozuna was also onstage for the performance. And, they were joined by Selena Gomez, who is also featured on the track. Just like Cardi, Sel showed up without notice, and not only was it her first-ever Coachella appearance — but, it was the singer’s big return to the spotlight. Selena has laid low this past year, as she took some time away to deal with mental and physical health issues. 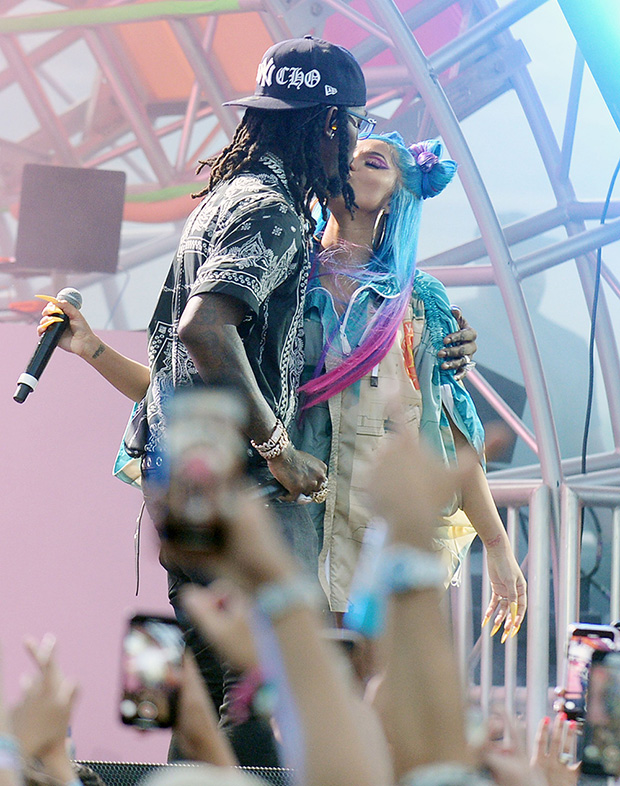 Cardi B and Offset share a kiss on stage during his REVOLVEfestival set at Coachella on Sunday, April 14, 2019. (Photo credit: Broadimage/Shutterstock)

Meanwhile, Cardi and Offset have been going strong since she began dropping hints in January that they had reconciled. As previously reported, Cardi confirmed that she split with Offset in a now-deleted video on Instagram in December [2018]. The news came after he was accused of cheating on her, which he later fessed up to. After a public apology tour, where he crashed the stage of one of her shows with flowers and a cake, the pair was able to work things out.

Cardi and Offset even took a family vacation after she won the Grammy for Best Rap Album [Invasion of Privacy] at the 2019 awards show. The couple vacationed together in Mexico, where they spent family time with their daughter Kulture Kiari Cephus, who will turn 1 in July.