Dwyane Wade’s last NBA home game in Miami was a family affair. Dwyane and wife Gabrielle Union, while holding their 5-month daughter Kaavia, shared a sweet kiss after the game was over.

Dwyane Wade, 37, played his last home game in Miami on April 9. Gabrielle Union, 46, was by his side on the court cheering him on. After the game, Dwyane kissed his gorgeous wife. Gabrielle, who looked stunning in a white jumpsuit, was holding their adorable 5-month-old daughter Kaavia. Gabrielle and Kaavia sat courtside as Dwyane scored 35 points at his final home game in Miami ahead of his retirement.

Gabrielle and Kaavia sat next to pals John Legend, 40, and Chrissy Teigen, 33, during the game. Kaavia was super chill sitting on her mom’s lap while watching her dad play. At one point during the game, Dwyane accidentally crashed into John and Chrissy. Chrissy tweeted about the hilarious moment and called the photo that went viral “a renaissance painting.”

The Miami Heat beat the Philadelphia 76ers 122-99. Dwyane is set to play his final NBA game ever against the Brooklyn Nets on April 10. Dwyane has been with Miami for the majority of his career. He was drafted to the Miami Heat in 2003 and stayed until 2016. After brief stints with the Chicago Bulls and Cleveland Cavaliers, Dwyane returned to the Miami Heat. 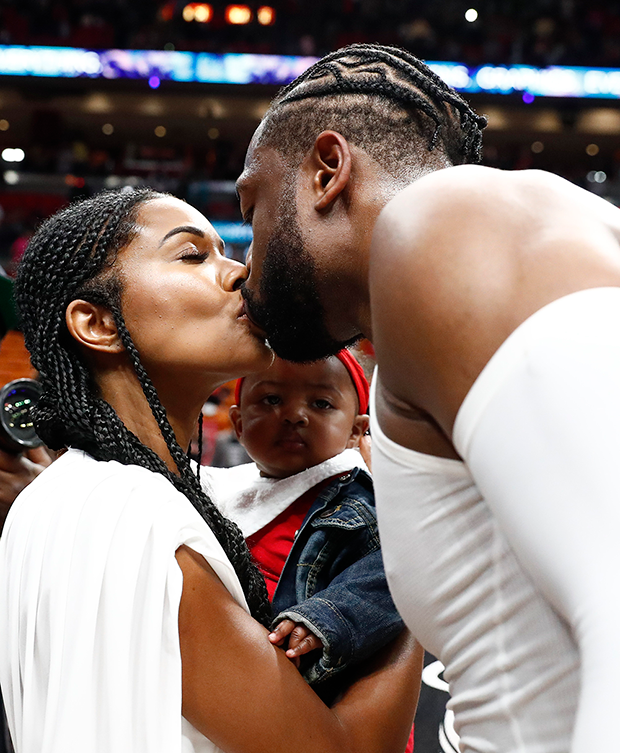 Dwyane announced in Sept. 2018 that the 2018-2019 would be his final NBA season. HollywoodLife talked EXCLUSIVELY with Gabrielle and she opened up about her husband’s decision to retire. “He is one of those people that he is a superstar that transcends his profession,” Gabrielle told HollywoodLife. “I am looking forward to what is next. I mean personally, I would love for him to go the [Michael] Strahan route or America’s Got Talent route. The world is his oyster and maybe it is his time to step out on faith and see what is out there for him.”