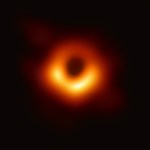 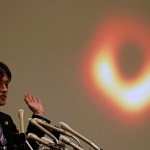 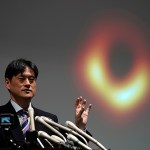 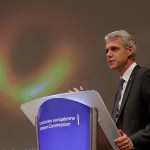 Is that the eye of Sauron? No – it’s a black hole! Scientists revealed that they photographed the cosmic phenomenon for the first time, and the Internet responded…with hilarious jokes and memes.

“We’ve exposed a part of our universe we’ve never seen before,” Shep Doeleman, an astronomer at the Harvard-Smithsonian Center for Astrophysics, said when revealing the first picture ever taken of a black hole. The image — revealed during a Wednesday (April 10) morning press conference in Washington D.C., per The New York Times – depicts luminous gas swirling around a supermassive black hole at the center of the Messier 87 galaxy, within the constellation Virgo, some 55 million light-years away. The black hole in question is about seven billion times more massive than our sun, and was described by the Times as “a smoke ring framing a one-way portal to eternity.”

The Internet, on the other hand, saw it as…so much more. “The black hole is the Dark Souls dark sign,” @GenePark tweeted, referencing the notoriously difficult video game. “Does the universe have an easy mode?” Speaking of video games, @ClementJ64 was ready to fire up the Super Nintendo, as he said it was “just sector O of the Lylat System” in Star Fox. “every time I look at the black hole, I just want peach o’s,” @Alex-Abadas tweeted, proving that science can be delicious. Others said that the picture reminded them of the eye of Sauron, of Marvel’s Galactus, of orange-frosted donuts, and the Xbox’s “Red Ring of Death.”

“y’all managed to ruin the majesty of space, time, and the cosmos before 9:00am,” @AnAndyPaul tweeted. Despite the mocking memes, the image is indeed a triumph of science. It was taken in April 2017 by the Event Horizon Telescope Collaboration, called EHT, which CNN reports is a “global network of telescopes.” To capture the image of a black hole — an object that is so dense that not even light can escape it — scientists combined the power of eight radio telescopes around the world using “Very-Long-Baseline-Interferometry” which effectively created a virtual telescope around the same size as the Earth itself. It took two years of computer analysis to produce the image and to confirm that humanity had captured something never seen before.

Black holes are made up of huge amounts of matter squeezed into a very, very small area. This mass creates inescapable gravitational fields, which sucks in everything around it – including light. Black holes also have a way of super-heating the material around them and warping spacetime, per CNN.

“Black holes have sparked imaginations for decades,” said National Science Foundation director France Córdova, per CNN. “They have exotic properties and are mysterious to us. Yet with more observations like this one they are yielding their secrets. This is why [the National Science Foundation] exists. We enable scientists and engineers to illuminate the unknown, to reveal the subtle and complex majesty of our universe.”