Abby Lee Miller was in attendance at JoJo Siwa’s sweet 16 birthday party on April 9, and she looked absolutely thrilled to be supporting her former student. Abby is in the midst of recovering from an intense battle with cancer and several surgeries, but she appeared in good spirits as she rode her wheelchair down the pink carpet at the event. Abby wore her usual all-black outfit for the party, with her shirt featuring a cold shoulder to show some skin. She styled her hair in curls and showed off very tan and glowing skin. The dance instructor smiled big for photos and carried a present for JoJo on the lap.

In April 2018, Abby was diagnosed with Burkitt lymphoma, which is a very aggressive form of non-Hodgkin’s lymphoma. She was serving a prison sentence for fraud in a halfway house at the time, but was transferred to a hospital to complete her sentence. Abby has had several rounds of chemotherapy and two intense surgeries on her spine, which left her confined to a wheelchair. She has been in physical therapy, but is still re-learning how to walk. It’s unclear how long she will continue to receive treatment, but Abby has been getting back to her normal life as much as possible.

She’s even back to working at the Abby Lee Dance Company, and will return for season eight of Dance Moms later this year. The first trailer for the new season dropped earlier this week, and Abby doesn’t seem to have missed a beat when it comes her strict teaching style. 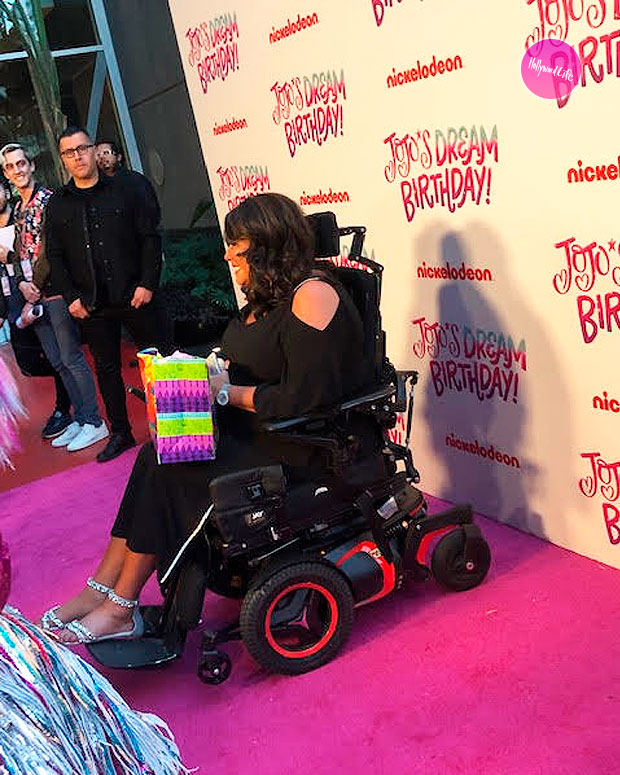 JoJo’s birthday party was a star-studded affair, with plenty of other YouTube and Dance Mom stars in attendance. Plus, North West and Penelope Disick also made an appearance, and they looked SO cute in their JoJo-inspired outfits! Abby, North, Penelope and of course JoJo will all be celebrating AGAIN on May 18, with the Nickelodeon TV Special, JoJo’s Dream Birthday! You can catch it at 8 PM ET/PT!