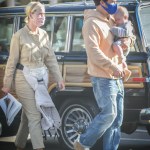 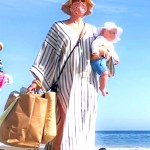 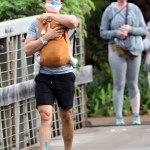 Katy Perry left dinner in style, when she rocked a bright orange flight suit and helmut to hop on the back of Orlando Bloom’s motorcycle in LA on April 8.

Katy Perry, 34, and Orlando Bloom, 42, headed to dinner in LA on April 8, when Katy looked prepared to sky rocket out of there as she donned an $800, faded orange Ralph Lauren Flight Suit. The limited edition one-piece zip up jumpsuit, was based off a US flight suit from the 1960s, as it even features military inspired patches on the front of the suit. The singer paired the one-piece with black Adidas Nite Tracker Sneakers which featured neon orange stripes, a black leather Chanel Waist Bag and a black Bandolier Lucy iPhone Case across her body. While we might have liked the jumpsuit worn on it’s own, it looked a bit too much like a costume, as Katy paired it with a giant motorcycle helmut, which she kept on before she even left the restaurant.

The best part about Katy’s outfit was that she hopped right on the back of her fiancee, Orlando’s motorcycle, and the outfit totally went with the theme. Meanwhile, Orlando was dressed in a full Canadian tuxedo, wearing a pair of dark wash jeans and a matching denim jacket on top, sporting a neon orange t-shirt underneath. While we don’t know if it was planned for the couple to both wear orange, the entire scenario seemed planned, as if they had thought about wearing these outfits and not taking off their helmuts, beforehand.

We love seeing this happy couple together, especially since they’ve been on-and-off since 2016, when they were first spotted getting cozy together at a Golden Globes after party together, in January of that year. Despite both having previous marriages, Katy to Russell Brand, and Orlando to Miranda Kerr, who he has an 8-year-old son, Flynn, with, they still manage to make an adorable couple.

On Valentine’s Day of this year, Katy and Orlando officially got engaged, as Orlando posted a photo of them to his Instagram, where Katy is showing off the massive ring he got for her. The ring is so unique and stunning, as it’s in the shape of a flower with a bunch of diamond petals, as the center is a massive ruby.