Amber Heard looked cozy in a white bohemian dress while out for a sunny stroll in LA on April 7. The actress went braless underneath her flowy maxi dress, which she paired with brown snakeskin boots.

Amber Heard, 32, stepped out in LA looking fresh-faced and relaxed on Sunday. The actress went braless in a plunging white maxi dress, which featured a cinched waist and parallel crocheted patterns throughout. Amber paired her festival look with brown snakeskin boots and two french braids in her hair, along with gold bangles around her right wrist. — See her full look below!

The Aquaman star was spotted out solo, despite being photographed on many occasions recently with her new beau, Andy Muschietti, 45. — An Argentinian director, whose most recent credit includes the 2017 horror film, It. He is currently filming the sequel titled, It: Chapter Two, which will star James McAvoy, Jessica Chastain, Bill Hader and Bill Skarsgård. Andy also directed the 2013 horror film, Mama.

The pair, who were recently photographed kissing in LA, first sparked romance rumors in mid-march. The relationship is fairly new, and both Andy and Amber have yet to verbally confirm if they’re an official couple. Amber previously fueled dating rumors with art dealer Vito Schnabel in July of 2018, when they were seen holding hands at Wimbledon in London. Before that, the actress was also linked to Tesla founder Elon Musk. 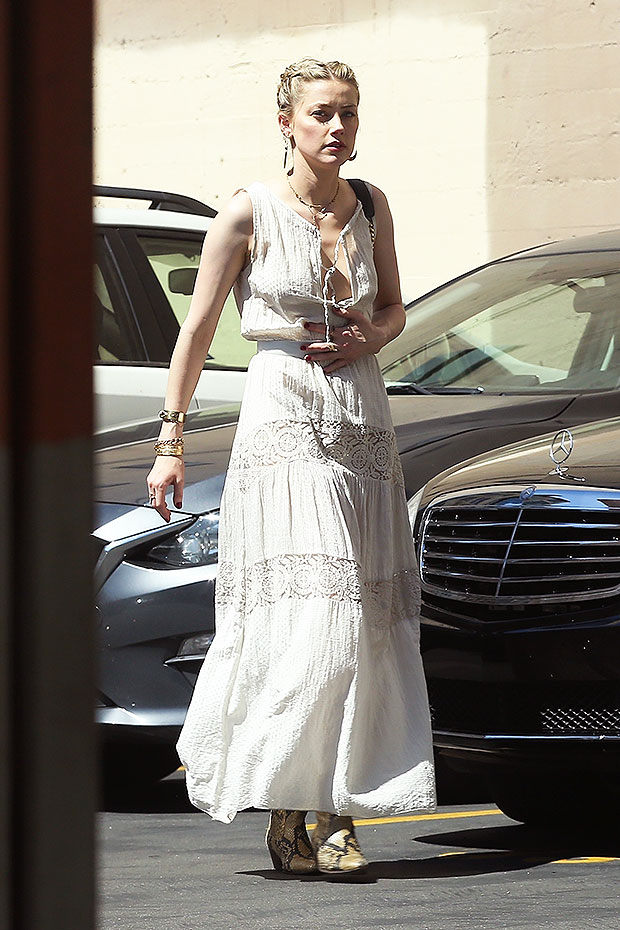 Amber’s outing came just a few weeks after her ex, Johnny Depp, 55, filed a $50 million defamation lawsuit against her. Their tumultuous split ended in an acrimonious divorce that included allegations of domestic abuse, all of which were aired out in tabloids and online. Now, in new legal documents, Johnny calls Amber’s allegations of domestic violence against him a “hoax.”

In the court papers, obtained by HollywoodLife, Johnny claims it was Amber who was the abuser in their relationship. “In one particularly gruesome episode that occurred only one month into their marriage,” the documents read. “Ms. Heard shattered the bones in the top of Mr. Depp’s right middle finger, almost completely cutting it off. Ms. Heard threw a glass vodka bottle at Mr. Depp – one of many projectiles that she launched at him in this and other instances. The bottle shattered as it came into contact with Mr. Depp’s hand, and the broken glass and impact severed and shattered Mr. Depp’s finger. Mr. Depp’s finger had to be surgically reattached.” — The documents go on to claim that Amber “disseminated false accounts of this incident, casting Mr. Depp as the perpetrator of his own injury.”

Johnny’s lawsuit came months after Amber wrote an op-ed in December 2018 for the Washington Post titled, “I spoke up against sexual violence — and faced our culture’s wrath. That has to change.” The two, who met on the set of their movie, Rum Diary, were married from 2015-2017.