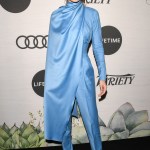 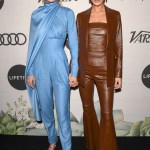 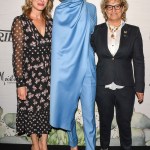 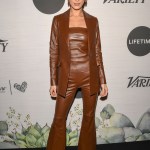 While on the star-studded red carpet for Variety’s Power of Women event, Jennifer Nettles told HL EXCLUSIVELY about what it was like doing a show with Taylor Swift on her ‘Reputation’ tour!

After collaborating with Taylor Swift, 29, on the song “Babe“, which went on to garner an Academy of Country Music Awards nomination for its music video, Jennifer Nettles, 44, is “super proud” of Taylor. While walking the red carpet at Variety’s Power of Women NYC luncheon at Cipriani on April 5, the Sugarland singer told HollywoodLife EXCLUSIVELY about whether she’d like to collaborate with the pop star again, following the song’s success. “Oh my God, I would love to,” she told us, before addressing Taylor personally. “Girl, listen up, I am here. Let’s do it.”

“I think she is fantastic as a songwriter,” she said, before discussing what it was like joining Taylor on stage for her Reputation tour. “We went actually to her tour and did a show with her. If you want to hear 100,00 girls screaming, that was the Reputation tour. And it was just a cacophony. And her fans are so loyal, and she is so tapped into what young women want to hear, so I’m super proud for her.”

When asked about how her hit song “I Can Do Hard Things” has personally empowered her, Jennifer told us that her single was inspired by exactly “what it sounds.” She told us, “I was going through a really hard time at the time. And I thought I was just writing my own little confessional self. And then what happened was when that song came out, sort of a groundswell of community start to happen of women sharing their own stories, saying, ‘This is my story; this is my song.'”

“That’s what I think today is about also,” she told us. “It’s coming together, celebrating each other, so this song just felt appropriate.”