Kylie Jenner, what’s that on your left hand? — The ‘KUWTK’ star was spotted out with a massive diamond ring on her left hand while out in LA on April 3! Her outing came right after her tropical vacation with Travis Scott.

Kylie Jenner, 21, sparked engagement speculation while out with her assistant Victoria Villaroel in Los Angeles on Wednesday. The Kylie Cosmetics CEO wasn’t shy about flashing her square-cut diamond ring, which was strategically placed on that finger. — You know, the one that usually symbolizes a forthcoming marriage. Take a look at Kylie’s stunning rock, below!

While nothing about an engagement between Kylie and boyfriend Travis Scott, 27 has been confirmed, the two did just return from a tropical vacation together. The parents of 1-year-old Stormi Webster jetted down to Mexico in late March, where they brought their baby girl along for some family time. Although much isn’t known about their quick getaway, Kylie shared a video of Stormi walking down stairs with the help of her dad. She was dressed in an adorable white onesie and strappy sandals, with a pink Birkin bag (casual), that her mom said she just wouldn’t let go of, in her hand. When Kylie and Travis got some alone time, the reality star shared a few sultry snaps of her in a skintight white dress.

The rapper recently completed the second leg of his Astroworld tour, which kicked off in November and wrapped on March 24 in Charlotte, North Carolina. Therefore, a vacation with his girls was well-deserved. Travis will hit the road again on April 5, where he is scheduled to perform in Las Vegas. More show dates are slated to follow, as the “Can’t Say” rapper is booked for numerous festival gigs in May and June. 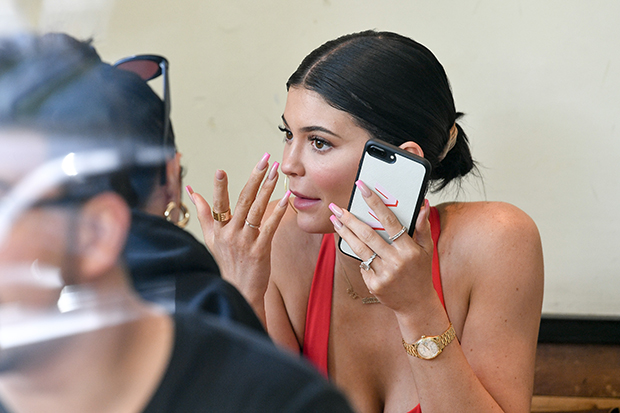 Kylie Jenner is photographed with a diamond ring on her left hand while out with her assistant Victoria Villaroel in Los Angeles, CA on Wednesday, April 3, 2019. (Photo credit: MEGA)

How about that diamond ring, though? — But, there’s no need to get too excited about a possible engagement, because the youngest Kardashian-Jenner sister has been photographed out and about with questionable rings on that finger in the past.

Kylie, along with Travis and their daughter, were photographed upon returning from vacation on March 31, where she was spotted with a diamond on her left hand. The ring appeared similar to the one (pictured above). However, it still remains a mystery what the diamond actually symbolizes.