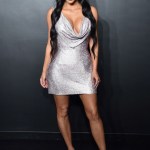 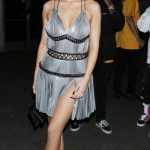 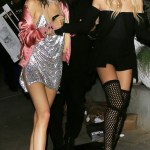 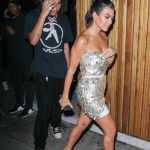 All three Kardashian sisters hit up Jimmy Kimmel’s sofa ahead of the ‘KUWTK’ season 16 premiere. Kim revealed that the name Rob is on top of her list for the new son she’s expecting via surrogate.

t’s a rarity to get all three Kardashian sisters in one place for an interview. But Kourtney, 39, Kim, 38, and Khloe, 34, hit up Jimmy Kimmel Live from Las Vegas on April 1 to talk about new season of their family’s E! reality show and all other current events in their lives. Kim, 38, and husband Kanye West, 41, are about to welcome a second son to their family via surrogate and Kim said she’s holding off on naming the infant until he’s arrives but has one very special name on her list. “I go three or four days nameless until something really connects,” she revealed but she does have one backup name. She explained “I was truthfully thinking of naming him Rob.” Just like her dad and brother! Unfortunately it doesn’t flow with the rest of her kids’ monikers, as Kim rattled off “Then it’s North, Saint, Chicago – Rob, It doesn’t, like, really go. But I really was feeling that, and my brother approved that. So that’s our one kind of name.” Her sisters agreed that “Rob West” is a pretty dope name.

Kourtney agreed about holding off until deciding on a baby’s name until their personality clicks with a particular choice. She revealed that her four-year-old son Reign would have been named Preston if baby daddy Scott Disick, 35, had his way. “I did a week last time. I would try out a different name on different days. His name was Preston for one full day. I told Scott I know in my soul his name is Reign and Scott didn’t believe me. We called him Preston for one whole day and it didn’t work out,” she explained about Scott’s name selection.

Jimmy hit Khloe with the question that so many people have wanted to ask her ever since baby daddy Tristan Thompson‘s latest cheating scandal ended their relationship for good. “Is it time to stop dating basketball players?” he asked to a roar of applause from the audience. Sadly, even though she was cheated on by Tristan, Houston Rockets star James Harden and former L.A. Laker ex hubby Lamar Odom, she still hasn’t learned her lesson. “I like what I like what can I say?” about dating hoopsters before adding, “I should listen to my grandmother MJ and start to date accountants.”

Dating an accountant wouldn’t bring a dramatic storyline like getting cheating on by an NBA star though. The new KUWTK season 16 trailer dropped on March 27 and it’s clear Khloe will have the biggest plot line following  Tristan’s cheating scandal where her he fooled around with Kylie Jenner‘s longtime BFF Jordyn Woods, 21. She’s seen weeping in a confessional, saying “It just sucks that it has to be so public. I’m not just a TV show. Like, this is my life.” In another she reveals “Tristan might love me, whatever that means, but he has no respect for me whatsoever.” Khloe also shouts into the phone “My family was ruined”, and later screams “LIAR” at someone else on the other end of her phone. Yep, she probably wouldn’t get that drama with an accountant.