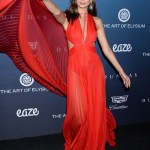 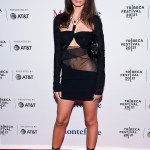 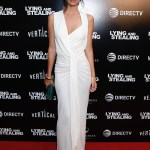 Emily Ratajkowski just proved again that she’s the sexiest bikini model in the game with another stunning Instagram shoot. Watch her spin and shine in a new video that flaunts her latest, very cheeky swimsuit!

Now that’s one way to sell a swimsuit! Emily Ratajkowski is the star of the latest ad for her swimwear line, Inamorata, and she’s rocking the tiniest thong bikini we’ve ever seen. The model and In Darkness star, 27, starred in a sexy video that showed her from behind, showing off the cream-colored thong bottoms — and her perfect butt. She tousles her hair and looks over her shoulder at the camera, and she’s gorgeous. You can’t see what the bikini top looks like, but it appears similar to others in her swimwear repertoire: a simple shelf tank with a halter neck. What we know for sure is that it flaunts her incredible abs.

You can watch Emily’s bikini ad below. We know that it seems like we talk about Emily posting a sexy pic every day, but they’re truly all too good to pass up! Whether it’s on the beach, the runway, at an event, or even just in her house, girl knows how to work a camera to become social media royalty. Take her instantly viral campaign for the Palms Casino Resort in Las Vegas. Emily starred alongside celebrities like Cardi B and Rita Ora in a video called “Unstatus Quo”, and HollywoodLife had EXCLUSIVE pics of the hot ensemble she rocked for the ad: a chic blazer and mock-turtleneck bodycon dress. It’s a decidedly more covered up outfit than she usually chooses, but still equally smokin’!

While the comments on Emily’s skimpy Instagram pics are overwhelmingly positive, there are always detractors who want to bring her down. Let’s face it; being a woman on the internet sucks sometimes. Everyone has an opinion on what the model should or shouldn’t wear, and she spoke out about that misogyny in a December interview with Vogue Australia. “The only argument that I think is sort of interesting is the conversation that somehow I’m playing into a patriarchal society by looking the way I look and capitalising [sic] on my sexiness,” she told the mag. “But I don’t really care if me wearing a crop top is somehow playing into some patriarchy, because it makes me feel good about myself, and I shouldn’t be limited on that. Making rules as to what a feminist should look like or wear is insane to me.”

Amen to that! We think Emily should wear whatever she wants, and flaunt what she’s got. This latest bikini pic is stunning.