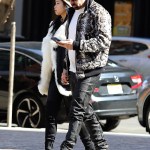 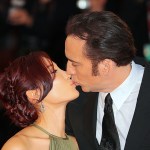 New pics revealed that Nicolas Cage and Erika Koike had a troubled marriage from the start of their Las Vegas nuptials.

They didn’t exactly have a “happily ever ever.” Just after getting married in Las Vegas, National Treasure actor Nicolas Cage, 55, and his estranged wife, makeup artist Erika Koike, 34, who have been dating since April 2018, were spotted in pictures arguing. Probably not the best way to start a marriage, and they’d likely agree, since Nicolas filed for their whirlwind marriage to be annulled on March 27. In the pics after their wedding on March 23, which you can see on TMZ, Nicolas and Erika appeared angry at each other and had a heated discussion while near a car and exchanging bags.

In the pics, Nicolas wore a leather jacket, orange t-shirt, and dark pants. He rocked some scruff on his face, as well. Erika wore a similar outfit to her partner, as well as bangs to accompany her straight long locks. She had her hand raised while she talked to Nicolas, and he posed his hands on his hips, seemingly annoyed at the conversation. Their tense convo may have been about their rushed marriage – which days later after the pics, Nicolas would attempt to annul.

Nicolas and Erika’s relationship first made waves in April 2018, when they were seen getting a meal together in Puerto Rico. Things progressed for the two, as they were also spotted in Beverly Hills one month later. Nicolas has previously been married to three other women before his marriage with Erika: Alice Kim, 35, Lisa Marie Presley, 51, and Patricia Arquette, 50.

While ending his marriage with Erika seems to definitely be what he wants, when Nicolas and Alice ended their marriage in 2016 after being married for 12 years, it was a “shocker” to him, he told The Guardian. The famous actor hasn’t revealed whether or not he and Erika will stay together after their annulment.