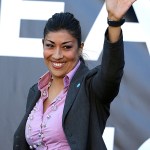 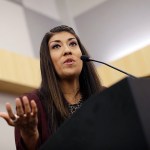 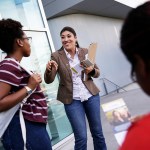 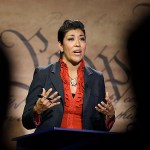 Lucy Flores was excited to accept Joe Biden’s support at a Democratic campaign rally in 2014, but she soon felt ‘uneasy’ and ‘gross’ as the former Nevada assemblywoman accused the former vice president of unwanted touching.

UPDATE (4/3/19, 3:42pm ET): On April 3, Joe Biden took to Twitter and shared a video of himself acknowledging the latest accusations against him. And with the video, which you can see below, he wrote, “Social norms are changing. I understand that, and I’ve heard what these women are saying. Politics to me has always been about making connections, but I will be more mindful about respecting personal space in the future. That’s my responsibility and I will meet it.”
ORIGINAL STORY: Lawyer and former Nevada assemblywoman Lucy Flores, 39, penned a personal essay detailing an encounter she found “blatantly inappropriate and unnerving” between her and former Vice-President Joe Biden, 76, published in The Cut on March 29. Flores, who was 35 and the nominee for lieutenant governor of Nevada at the time of the alleged incident, explained that Biden’s team offered the politician’s support at her campaign rally to “help boost voter turnout” in the state. Biden showed up to Flores’ campaign rally in Las Vegas on Nov. 1, 2014, and Flores recalled what happened before she took the stage in her side of the story. HollywoodLife has reached out to Joe Biden’s rep for comment.

“As I was taking deep breaths and preparing myself to make my case to the crowd, I felt two hands on my shoulders. I froze. ‘Why is the vice-president of the United States touching me?'” Flores recalled herself silently asking. She then claimed that Biden got even “closer” to her from behind, and “leaned further in” to inhale her hair. While Flores was already rattled from the unwelcome act, according to her account, it’s what allegedly happened next that disturbed her.

“He proceeded to plant a big slow kiss on the back of my head. My brain couldn’t process what was happening. I was embarrassed. I was shocked. I was confused,” Flores continued to allege. “I couldn’t move and I couldn’t say anything. I wanted nothing more than to get Biden away from me. My name was called and I was never happier to get on stage in front of an audience.”

Social norms are changing. I understand that, and I’ve heard what these women are saying. Politics to me has always been about making connections, but I will be more mindful about respecting personal space in the future. That’s my responsibility and I will meet it. pic.twitter.com/Ya2mf5ODts

While Flores clarified that Biden’s alleged behavior wasn’t “sexual” or “violent,” the former assemblywoman was upset over the supposed lack of professionalism, given Biden’s position (he was still Barack Obama’s second-in-command in 2014). “I had never experienced anything so blatantly inappropriate and unnerving before,” Flores confessed in her essay. “Biden was the second-most powerful man in the country and, arguably, one of the most powerful men in the world. He was there to promote me as the right person for the lieutenant governor job. Instead, he made me feel uneasy, gross, and confused.”

While Lores relayed these details to her staff, she decided to make her story public nearly five years later after seeing photos of Biden interacting with more women, and referred to a snapshot of the former vice-president kissing Senator Chuck Grassley’s wife on the lips in Jan. 2017. She also recalled seeing more photos of Biden “whispering in women’s ears” and “snuggling female constituents.” For the latter example, Flores linked to an article with a photo of Biden putting his hands on the shoulders of Stephanie Carter, the wife of former Secretary of Defense Ashton B. Carter, and proceeding to whisper in her ear in Feb. 2015. While Biden hasn’t made a formal announcement, there’s buzz that he is eyeing to join the 2020 presidential race.