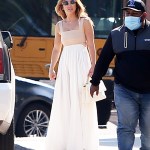 Jennifer Lopez is officially our Friday mood, as she stepped out on the set of her upcoming movie, ‘Hustlers,’ wearing a fluffy bathrobe and Ugg boots in NYC on March 29.

Another day, another costume for Jennifer Lopez, 49. JLo has been super busy filming her highly anticipated new movie, Hustlers, and when she’s not in costume, she’s lounging around in a bathrobe and Uggs, which couldn’t be more relatable. The recently engaged star has given us all a sneak-peek of the new film, as she’s in a different costume every day, but this look just might be our favorite. She rocked a light blue fluffy bathrobe with nothing underneath and paired it with short tan Ugg button boots, putting her bare, spray-tanned legs on display. She accessorized with a silver diamond nameplate necklace, which was the most popular trend in the early 2000s, massive silver hoop earrings and a bunch of rings. Her hair reminded us of the old JLo, as it was down in wispy waves with her side bangs swept to one side.

While this outfit may have just been a costume, it is unbelievable how JLo can make absolutely anything look good. Some of her other outfits while filming the stripper movie give us serious ’90s throwback vibes. One outfit JLo wore, included skin-tight white boot-cut jeans styled with an even tighter black and white tank tap with a cowl neck that showed off massive cleavage. She paired the look with sky-high snake-skin platform boots which she was spotted wearing around a shopping mall in NYC on Tuesday, March 26.

Another look the singer wore recently on set, and probably one of our all-time favorites, was when she was walking around NYC in super tight and high-waisted, dark wash skinny jeans. Tucked into her jeans was a black Juicy Couture tank top which was emblazoned with the word ‘Juicy’ across her chest in rhinestones. On top of the outfit, she donned a massive fluffy gray cropped fur coat, accessorizing with insanely high black leather stiletto boots, covered in gold studs, and huge silver name-plate hoop earrings.

JLo isn’t the only one who is starring in the exciting new movie. Cardi B, 26, will also be in the film, making her big-screen debut, plus other stars including Riverdale’s Lili Reinhart, Julia Stiles, Keke Palmer and Trace Lysette are also making appearances in the movie.