Just in time for Opening Day. Kevin Hart recruited Kourtney Kardashian to help a bunch of hunky Los Angeles Dodgers get ready for the new season, and it turns out the ‘KUWTK’ star has some skills.

“I got my girl with me. I don’t know if I can say ‘the’ with her name, it doesn’t sound right. Ladies and gentlemen, I’ve got Kourtney Kardashian on the show,” Kevin Hart, 39, said on the episode of his YouTube series, Kevin Hart: What The Fit, released on March 28. “I like ‘the,’” Kourtney says. “ ‘The Kourtney Kardashian.’” There are plenty of things for Kourtney to like in this video, as she and Kevin join the Los Angeles Dodgers to help the team train for the upcoming season. Before they hit the field, the duo visits the players in the locker room, as Kourt gets a glimpse of a shirtless Brian Dozier.

“Can we check out the showers?” she asks with a flirty giggle. “I think we should.” While Kourt doesn’t get any glimpse of any soapy sports stars, she does get a lot of action – out on the field. During a round of batting practice, Kourt connects with three pitches (whereas Kevin struggled to hit a single pitch.) Plus, Kourt even brought the heat when it was her turn to throw. Kourt’s fastest pitch came in at 22 mph, while Kevin could only get up to 15 mph.

“I think I’m, like, a really good baseball player,” she says at the end of the video. “I pitched better than you and batted better than you,” she told Kevin, and while she’s right, both were allowed a chance to show their stuff by throwing the ceremonial first pitch at the Aug. 3, 2018 game (h/t PEOPLE). Kevin and Kourt were clearly a good luck charm, as the Dodgers blew past the Milwaukee Brewers, 21-5. It was the most they’ve ever scored at Dodgers Stadium.) 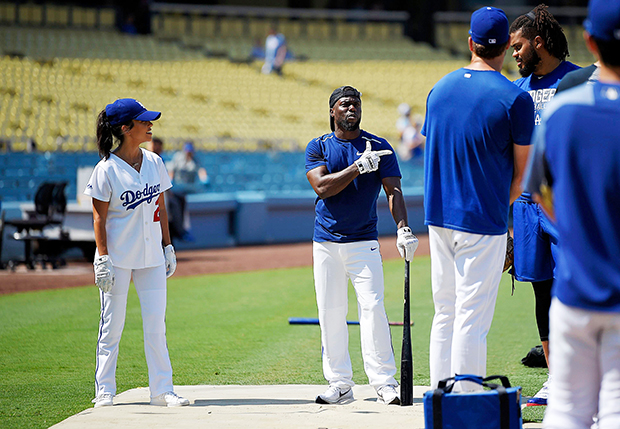 Kourt said she had some experience at the start of the video. I’ve played softball, does that count?” she said, indicating the charity softball game she and her family – Kris Jenner, Kim Kardashian, and a very pregnant Khloe Kardashian – played against Michael Jackson’s family in 2018. “Tito Jackson is a member of the Jackson 5,” Kourt said on the 2018 episode titled Let’s Play Ball (h/t Daily Mail). “We grew up with his three boys.” Despite being coached by Jennifer Lopez’s future husband (and New York Yankees legend) Alex Rodriguez, the family “sucked,” according to Kim. Perhaps the family can challenge the Jacksons for a rematch, now that the Kardashians have a star player among their ranks?