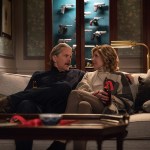 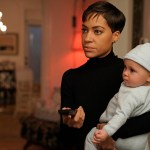 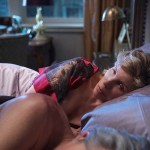 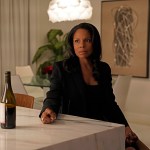 Spencer Zschau is back. Aaron Tveit reprises the character in this EXCLUSIVE preview of the all-new episode of ‘The Good Fight.’ Spencer has a big bone to pick with Blum.

Spencer Zschau (Aaron Tveit) will be facing off against Maia (Rose Leslie) and Blum (Michael Sheen) on a murder case in the new episode of The Good Fight, and he’s not afraid to taunt them a little. Spencer tells Blum that he’s going to find it hard to shake him up. He throws his side’s offer on the table and Blum laughs in his face. “Get the f**k out,” Blum huffs. Spencer says his current offer is the best Blum and Maia are going to get. When Spencer hands over discovery about the case, it’s nothing but a bunch of takeout menus. “I assume you’ll be getting us the real discovery by end of day,” Maia says. Spencer quips, “It’s definitely a good assumption.”

Before he walks out, Spencer has to say a few words to Blum. He tells Blum that Alvin Zschau was his father, but the name doesn’t ring a bell in Blum’s head. Alvin was a federal judge, and Blum fed lies and smears to the press to get him to resign. Blum and Alvin’s past has fueled Spencer. “I’ve waited for this moment for a long time, meeting you face-to-face in order to say, ‘See you in court,'” Spencer says to Blum.

New episodes of The Good Fight season 3, which also stars Christine Baranski and Cush Jumbo, are available weekly on Thursdays exclusively on CBS All Access. Aaron recently reunited with the rest of the original Broadway cast of Next to Normal, for a Musical Mondays concert series. The talented actor and singer will also be starring on Broadway in the highly-anticipated Moulin Rouge! musical, which will debut in summer 2019.