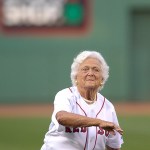 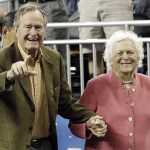 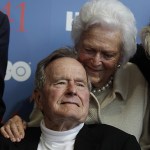 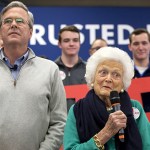 Barbara Bush died no longer a Republican, a new biography about the late first lady reveals. Bush blamed Trump for making her abandon the party, and her ‘angst’ over his presidency for her dire health issues before her death.

Barbara Bush‘s intense dislike for Donald Trump affected her health and made her leave the Republican party, according to a new book, The Matriarch: Barbara Bush and the Making of an American Dynasty. “I’d probably say no today,” she told USA Today‘s Susan Page, the author of the biography, in an February 2018 interview when asked if she still considered herself a Republican. Page compiled hours of interviews with the former first lady, one of the most recognizable faces of the GOP, and one theme remained constant throughout their time together: Bush believed Trump was bringing the party down. After Trump’s election in 2016, a friend jokingly gave Bush a countdown clock timed to the end of Trump’s presidency. It remained on her bedside table until her death in April 2018, Page wrote.

Bush’s negative opinion of Trump didn’t just manifest during the presidential race. She gave Page access to her diaries, which revealed that she called him “the real symbol of greed in the 80s” in 1990. The January entry came after she read an article about Trump speaking at a charity gala in Los Angeles, which was attended by Ronald and Nancy Reagan. He called out the former president for high-priced speeches he apparently gave in Japan. “I see President and Mrs. Reagan in the audience. Did you have to pay them $2 million?” Trump said. She also saved news clippings about Trump’s separation from his first wife, Ivana Trump, to share with a friend. She noted that she heard Ivana didn’t think the $25 million divorce settlement was enough. “The Trumps are a new word, both of them,” she wrote. “Trump now means Greed, selfishness and ugly. So sad.”

Bush, who battled congestive heart failure and chronic pulmonary disease, landed in the hospital in June 2016 due to what she called a heart attack. The cause of the emergency? “Angst” over the presidential race and the way that Trump ridiculed her son, Jeb Bush, who was running against him at the time, she told Page. Jeb apparently urged her to let it go and focus on her health, which she tried to do. To her great disappointment, Trump went on to win the GOP nomination. Rather than voting for him, she revealed that she wrote in Jeb’s name; her late husband, former President George H.W. Bush, voted for Hillary Clinton.

“I’m trying not to think about it,” she told Page in 2017, shortly before the first anniversary of Trump’s win. “We’re a strong country, and I think it will all work out.”