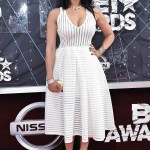 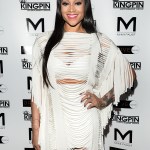 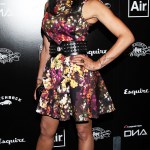 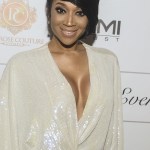 The ‘Love & Hip Hop: Atlanta’ season 8 premiere featured a major fight between Mimi and Spice after Spice said she wanted to bleach her skin. Plus, Stevie J and Faith Evans come clean about their marriage.

The season 8 premiere kicks off with Stevie J getting ready for the Soul Train Awards and his future. He’s a “changed man” because of his new wife, Faith Evans. Their friends want to know how their sudden marriage happened. “When we came here for a business meeting, you know, we called the Elvis impersonator,” Stevie jokes. He later adds, “We did rush to the altar, but the decision wasn’t really that spontaneous. We lost my friend and Faith’s first husband, Biggie, together and over these years, we’ve just grown closer as friends.”

Stevie explains that after years of friendship, it was finally the right time for their romance. Even though they’ve had their ups and downs, they were friends first so their “foundation is strong.” Stevie later presents Faith with the Lady of Soul awards at the ceremony. Because he’s been so busy with his whirlwind relationship, Stevie hasn’t had the chance to tell his ex, Mimi Faust, or his daughter, Eva, about the marriage.

Spice is currently performing at nightclubs and smaller venues. She wants to take her music career to the next level. She brings in an artist developer named Vaughn, who basically tells her that she needs a new look. She gets offended by his comments. Spice is doing everything she can to make a better life for herself and her kids, who are currently living with her mom in Jamaica. They miss their mom and want her to come home. She breaks down in tears over the fact that she’s separated from her kids. After some thinking, Spice believes she may need to do something “drastic” to her look.

While Stevie was off getting married, Mimi was dealing with a terrifying ordeal. Someone broke into her house and shot at her. Little Eva was in the house at the time. Mimi calls up her girls and recalls the horrifying events of that night. She shows them the bullet that hit her car. Mimi is still really shaken up over it. Meanwhile, Scrapp Deleon has been released from prison into a halfway house. He can’t get out of the halfway house until a blood relative with no criminal record comes to get him. Turns out, Scrapp’s got a half-sister he never knew about! His sister comes and gets him from the halfway house.

Stevie and Faith meet up with Eva for dinner. He finally tells his daughter that he’s married. He asks Eva if she would consider moving to Los Angeles to live with him and Faith. She tells her dad that she’s got to ask her mom. When Eva brings it up to her mom, Mimi is pissed. She gets even angrier when she finds out Eva’s already met Faith.

Spice believes that her “look is too dark,” so she wants to lighten her skin color professionally. “I believe that a lot of people kind of bash me or degrade me because of the color of my skin so I’m kind of provoking them a bit,” she tells a doctor. The doctor says that skin bleaching can increase Spice’s chances of getting cancer and she’s going to need a psychological evaluation. Spice gets offended by the idea of psychological evaluation and storms off.

“All I want to do is make it as an artist here in America but now I’ve been pulled in every direction,” Spice admits. “I know that lightening my skin is politically incorrect but that is a drastic measure I have to take to call out everyone for criticizing my look.” Spice’s pal, newly-engaged Karlie Redd, comes to support her at a new photo shoot. When Karlie sees Spice, she’s unrecognizable with lightened skin due to makeup. Soon, Mimi and Rasheeda show up. They think she’s joking, but Spice says she’s “creating awareness for colorism.” They’re just as shocked as Karlie over Spice’s current look. Rasheeda calls Spice “crazy as hell.” Mimi wants to make sure Spice isn’t considering going through actual skin bleaching. Rasheeda tells Spice that she doesn’t need to bleach her skin. Spice goes off about how black women continue to be bashed for the color of their skin. “This is my way of protesting,” Spice continues. “I’m willing to go through all of this, and the point is if I don’t do this my daughter may not be as strong as me so she may go through the same thing as me as a child.” Mimi calls Spice’s idea “ridiculous and doesn’t make f**king sense.” Spice decides to call out Mimi for getting a boob job and thinks that is on the same level as skin bleaching. Mimi is not having that and they start fighting. “You look like a white woman trying to be black,” Mimi tells Spice. “That’s what you look like. Do you know what the world is going to say when they see you?” They start screaming at each other when Spice says Mimi doesn’t know what it’s like to be black. Mimi storms off and Spice continues to yell at her.