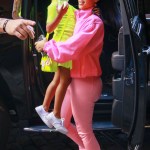 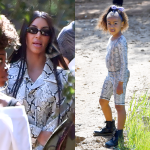 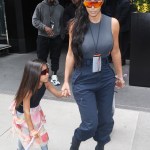 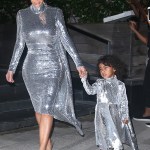 There is no doubt about it: North West is her mother’s daughter. Kim Kardashian’s firstborn was the spitting image of her mother, as they both rocked matching snakeskin outfits on their way to church.

Forget about stories about Eve and the serpent in the garden. Kim Kardashian, 38, and North West, 5, killed the snake and turned it into a set of fashionable outfits. The Keeping Up and the Kardashians star and her eldest child matched while attending a March 24 church service in Los Angeles. Both North and her mother wore white snakeskin, with Kanye West’s baby girl rocking a long-sleeve top and shorts while Kim kept it classy with a snakeskin jacket-type of an ensemble.

The event was filled to the brim with celebrities. Kendall Jenner, 23, was there, and her older sister, Kourtney Kardashian, 39 brought along her kids, Reign, Penelope and Mason Disick. Other celebs in attendance included singer Harry Hudson, 23; Courtney Love, 54; Tyler The Creator, 28; Katy Perry, 32, and her fiancé, Orlando Bloom, 42. For those who didn’t get an invite, Kim and Kendall shared videos of the service to their respective Instagram Stories. The clips showed North jamming out to the church band, which played religious renditions of Kanye’s songs.

This isn’t the first time that North has turned her father’s church services into a fashion show. The prior week, on March 17, North and her cousin, Penelope, were spitting images of their mothers with their outfits. North’s black lipstick was a shade of Kim Kardashian, while Penelope’s velvet mini-dress was something her mother would wear (and the sharp bob also gave off Kourtney vibes.) 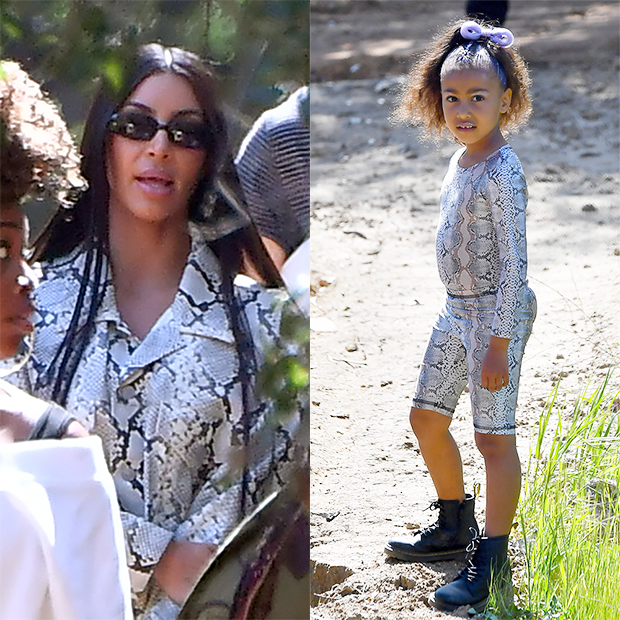 For some, seeing Kim at a church service might strike some as odd, but she has been open with her faith for years. “Whatever it is [I make], I give 10 percent away to the church,” Kim said when speaking about her spiritual side on a 2011 episode of Piers Morgan Tonight, according to E! News.

“There’s a charity that I work with a lot, The Dream Foundation, and my mom [Kris Jenner] has helped create a church [in Calabasas], so we help fund that…I get [what they mean] when they say more money, more problems. I definitely get that, but we have a great team of people that help us manage everything… [but] we just give back and try and help out any organization that’s close to our heart,” Kim added.