Chris Pratt was the very first celebrity to get slimed at the 2019 Kids’ Choice Awards. The Guardians of the Galaxy star was awarded Favorite Butt Kicker and making his acceptance speech when he was slimed. The slime totally caught Chris off guard, and it was hilarious. That green slime is going to be hard to get out of that beige suit. After his big win, Chris captioned three slime-filled photos on Instagram: “Thanks @nickelodeon and all the kids who voted!!! I’m humbled and honored to be your kids choice awards favorite butt-kicker. Now it [sic] you’ll excuse me I’ve got slime to clean out from deep within my nostrils.”

Will Smith was the next star to get covered in slimed from head to toe. The Aladdin star slimed the audience, and the KCAs returned the favor. His Aladdin co-stars, Mena Massoud and Naomi Scott, were saved from the slime. David Dobrik and Josh Peck got slimed together after David’s big win for Favorite Social Media Superstar. The stars that get slimed together stay friends forever. Adam Sandler got slimed in his New York Knicks sweatsuit after winning Favorite Male Voice from an Animated Movie for Hotel Transylvania 3: Summer Vacation. He said he was “not in the mood” to get slimed, but he didn’t have a choice in the matter. When you’re at the KCAs, getting slimed is almost mandatory. 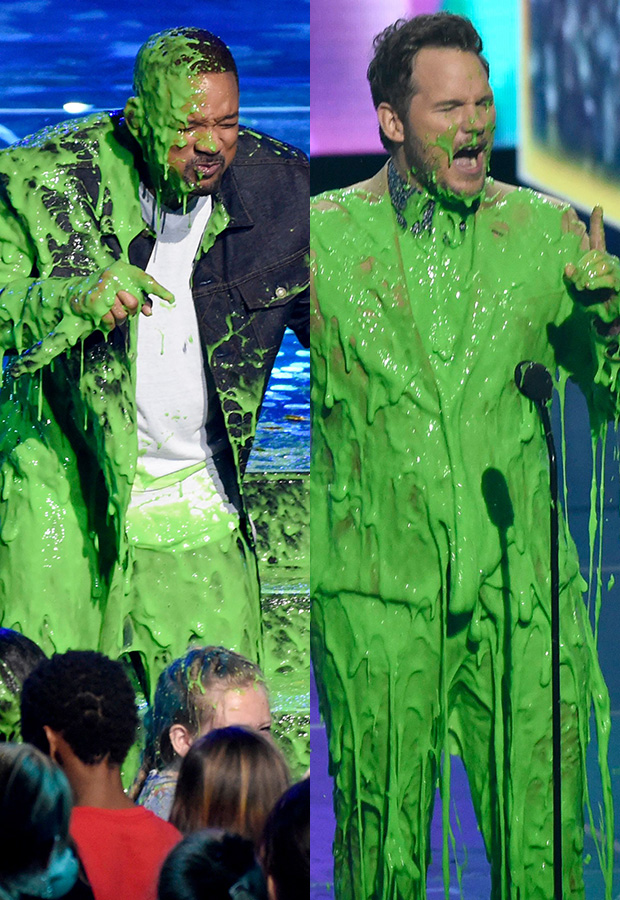 At the start of the show, host DJ Khaled revealed his massive slime jacuzzi. He asked for one, and he got it. A slime jacuzzi is something no one has ever seen before. During the ceremony, DJ Khaled donned a scuba suit and chilled in the slime jacuzzi. He was the very last celebrity to slimed at the Kids’ Choice Awards, and he also had the entire front rows of the audience slimed to close out the night.